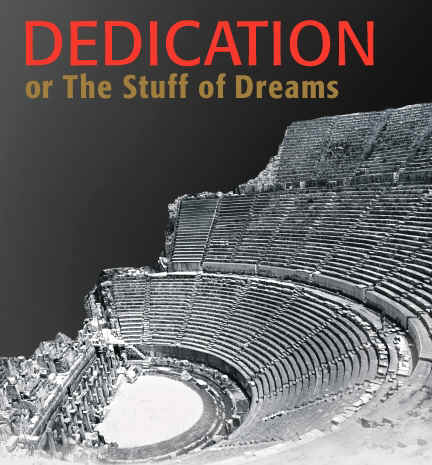 Nuncle Low (Nathan Lane), manager of a derelict children’s theater, is harried by typical problems: money, money, and something wrong with the light board. His stage is dark for the first twenty minutes of his show, until his Tech Director (Arnold Chalk) resolves the trouble. So, our stage is dark, too, the whole business a dead giveaway that the action will celebrate the mystique of the stage, giving us theater-on-theater, that old story, when it finally gets going, after the light board is fixed, long, long afterward.

As it is Nuncle’s birthday, people keep coming up from a basement storeroom with possible gifts for him, things like Sophie Tucker’s venerable make-up towel, a relic of the saint. Well, the metaphor still works, sort of; there must be people who never have seen the world divided up into three parts: the basement source of "a rag, a bone and a hank of hair" to dress the theater in illusions; a stage; and a tiny window high up in the fourth wall to let angels and fairy godmothers spy on good playwrights and reward them with showers of money.

Shakespeare is mentioned a few times as a sign of Low’s historical authenticity and point of sentimental reference. With deep sighs, Low tries to persuade the punk rock generation, his niece and her boyfriend, that his theater once took serious responsibility for bringing hope to the young. The cute, finger-snapping punksters understand little and care less. They tolerate Nuncle with their eyes rolled upward in a silent prayer for patience. He, in any case, has abandoned the merciless venues in Manhattan to run his children’s theater in a strip mall upstate. There, with the help of his professional and personal partner (Alison Fraser), he will convert the town’s old playhouse into a "place of wonder and imagination again."

The building belongs to the immensely wealthy, cancer riddled, Annabelle Willard, less a character than a vehicle for our own high priestess of theater, the irrepressible Marian Seldes. She charges the air with electrical energy while delivering scathing attacks on theater, children, and the human race in general; such is the privilege of the rich and dying. "I don’t have to like actors, I have money." This outrageous fairy godmother puts a price on her benevolence: she will give Low more money for his theater than he ever dreamed of, if he’ll give her sex. Twice she asks, "F&#151; me," matter of factly and to excellent effect. Mercifully, nothing unsightly comes of this or of anything else, for that matter. At a fairly leisurely pace, the dialogue just ambles down memory lane in the past tense with an aging star.

Act Two gets a bit tricky as the play now wants to fool with drama’s line between images and reality. The star reveals that not only is she dying, unlike other victims including Lane&#150;that’s the shocker nestling in the script here&#150;she knows when D day will come. It’s just the end point of birth day, she says. True enough. But there’s a limit to how much and what kind of truth about dying the stage can convey. (The sight of six dead bodies onstage at the end of Hamlet, for instance, strikes nobody as the sum of the play’s truth.)

Annabelle whips off her pretty wig to reveal her nearly bald pate&#150;a recognizable result of chemotherapy&#150;and it’s a horrible sight. Actress sans costume is a scary naked body. Oddly enough, at that point the script’s several allusions to King Lear stripping away his royal power with his "lendings"(ceremonial clothing) take on additional meaning. It is the Fool who names Lear "nuncle," the origin of this Lou Nuncle’s name (i.e., Lear-Low-Lane). So too, three, silent toughs suddenly appear pinned to a wall recalling the ugly brothers-in-law. Other of the script’s details also apply. Characters are real people (real but pinned to a script), Willard says, giving the hipsters their lesson on Shakespeare and the birth of a modern theater. Before him, theater was about gods and devils, no fun at all. They even can joke about "really" dying until a "prop" guillotine dragged on stage slams down to slice off the head of a mop.

Similar demonstrations of the relation between stage illusion and reality lead to Willard’s true proposition to Low: I’ll give you all of this make believe, my theater, free and forever, if you will kill me. This is no Pirandellian metaphysic about characters dying when the curtain comes down. She gives Lane a pillow and reminds him it was a good enough means to "off" Desdemona. In a word, she’ll support his love of fakery to the hilt if he’ll support her reality. She hates theater and hates him too for "twirling" at her command. He seems not to hear her bitchiness and simply performs for her without comment. If art must suffer humiliation for financial support, well, so be it.

Does any of this matter? Certainly the theme is hoary enough, and death is a big enough gun. Maybe too big, as the play fails to live up to it. How could it be otherwise? For that matter, the play also lets down both players, who are at the top of their game. Seldes, however, is playing an acid-dipped farce, while Lane produces a cuddly comedy, and both are right. The script only wants to entertain; if meaning flies out the window, so be it. The minimal action stretches every well rehearsed theatrical gesture, but means next to nothing. Cliches about theater and the profession come wrapped in sentiment and slathered in treacle. Small wonder the niece and boyfriend turn their backs on the established company and its wisdom, to wit: Yes, the "star system" seems to be dead. Yes, appreciation of Shakespeare appears to be generational. Yes, stars die in bright lights, theater owners in mufti. Yes, movies compete for a full house. And so on and on. The thing of it is, the dialogue is well polished, the acting smooth, the voices well modulated, all this and more talent simply "twirls" on the head of a pin.