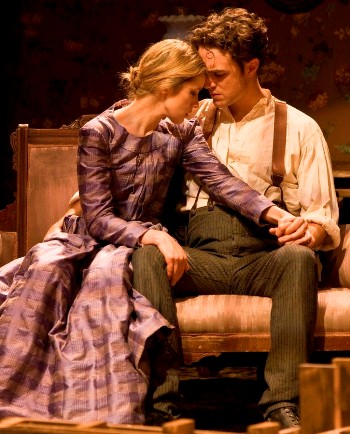 ‘Desire Under the Elms’

“Desire Under The Elms” was written in 1924 by Eugene O’Neill. Its plot was also the basis of a 1958 film with Sophia Loren, a 17th-century drama by Jean Racine and its dramatic origins can be traced back to several ancient Greek tragedies. In short, this play has legs.

And for good reason: it’s one helluva play.

It centers on an aging, despotic patriarch and his valuable farm; his three disgruntled sons hoping to inherit the property upon his death; an impoverished, third young wife who also wants the land as much as she wants the youngest son; and an unfortunate infant.

Under the adept direction of Dámaso Rodriguez, a gifted cast transforms these human impulses into flesh and blood, love and lust, hope and despair.

Ephraim Cabot (William Dennis Hunt) is a vigorous, 76-year-old who has clawed, with his bare hands, countless stones from the New England soil and stacked them to form walls that make both good neighbors and fertile land. Unwittingly, he has also stacked just as many stones in his heart.

He values hardness of body, mind and spirit to such an extent that he alienates himself from his sons and the three women who have given their hands to him, the first two having worked themselves to death trying to appease him and the third, much younger wife, Abbie (Monette Magrath), hoping to outlive him. He laments his loneliness, never looking to himself for its source.

The first two wives are only references and the two older sons by the first wife, Simeon (Christopher Fairbanks) and Peter (Steven Rockwell) are clownish figures, serving only to define their father’s mean, miserly character. They’re gone — to California, to join the gold rush of that era — by the end of the first act.

That reduces the play to the three essential figures — Ephraim, Abbie and Eben (Jason Dechert), the son of the old tyrant’s second wife — and the powerful emotions that youth, love and sex can never restrain but only unleash. Indeed, Magrath (in a flimsy white nightgown) and Dechert grapple so fiercely, so realistically, on the parlor floor that I began to wonder if A Noise Within would have to assign an “R” rating to the play.

The outcome of such passion is not surprising; what is surprising is the deep pain and unintended consequences of Abbie and Eben’s turbulent, if adulterous, love for each other. They bear those consequences well, even as they’re doomed by them.

Attention must also be paid to the “Desire” set — a two-story structure, suggestive of Grant Wood’s “American Gothic” painting, created by John Iacovilli and Grove Scenery. And the sad mood of the play is modulated by a fiddler (Enfre Balogh) who wanders along the perimeter of the stage, his music as haunting as the “Ashokan Farewell” tune used by Ken Burns in the PBS Civil War series of 22 years ago.