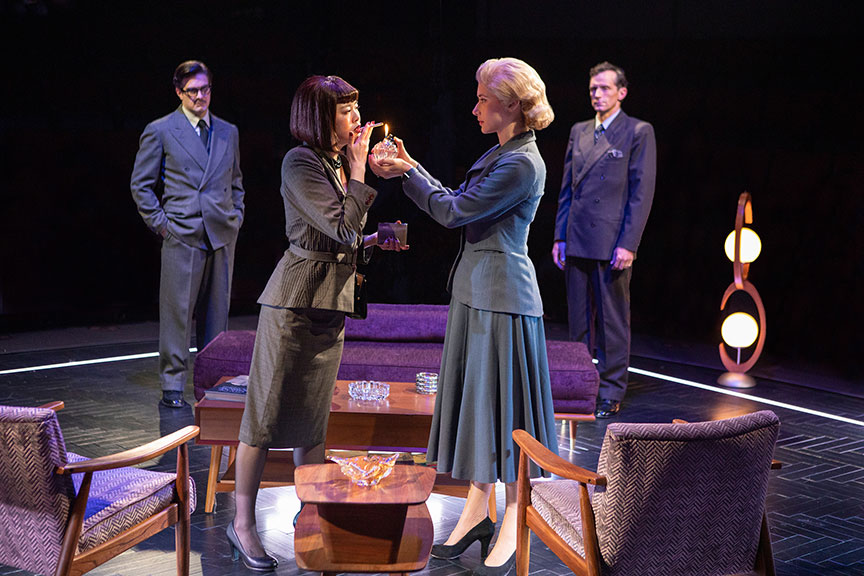 Tony Wendice is a world-class cad. Married for money, neglected his wife, got his nose out of joint when she took a lover and now wants her dead. To ensure fulfillment of that impulse doesn’t send Tony on a trip to the gallows, he has spent a year methodically planning the perfect crime to both eliminate his spouse and enlarge his bank account with her fortune. A life hangs in the balance when a fateful phone call is placed in “Dial M for Murder” at The Old Globe.

Originally written in the 1950s by English playwright Frederick Knott, this crime thriller has provided suspenseful puzzle-solving pleasure for theatre audiences and Hitchcock movie buffs for nearly seven decades. This world premiere Globe-commissioned revision by Jeffrey Hatcher is faithful to the original while enhancing the storyline with new plot twists and modern-era empowerment of the female characters.

The story opens in the London living room of upper-crust Brit Margot Wendice (Kate Abbruzzese) sharing cocktails with American writer Maxine (Ruibo Qian). They amicably discuss the end of their torrid love affair. The mood abruptly changes as Margot relays one of Maxine’s steamier love letters has found its way into the hands of an anonymous blackmailer. Public exposure of the letter’s contents would ruin both of their reputations.

In walks Tony (Nathan Darrow, in a compelling cold-blooded and manipulative performance). An aspiring author who lacks the writing chops to be a novelist, Tony has taken a PR job at a publishing house and is representing Maxine’s latest murder mystery. Isn’t that cozy?

Tony declines the women’s theater invitation, and they depart. He’s not alone for long as petty thief Lesgate (Ruy Iskandar, the embodiment of felonious intent) arrives at Tony’s behest. Lesgate thinks he’s about to consummate a deal on an overpriced car he’s selling that he doesn’t own. Tony, however, has another transaction in mind. He’s been watching Lesgate for quite some time and after laying out his unsavory past (it’s a doozy) the cornered criminal agrees to carry out the murder. Everything is in place to make the following evening Margot’s last, but the plan unravels. What’s left is a the living room carpet, the surfacing of the incriminating love letter and intended-victim Margot marched off in handcuffs by Scotland Yard Inspector Hubbard (John Tufts). Incidentally, Inspector Hubbard is the only character in the story not trying to kill or blackmail anyone.

The rest of the story is a taut multi-faceted game of wits in which Tony thinks he’ll soon be a rich widower; Maxine uses her crime-writer skills to connect the dots and Margot has an 11th hour surprise up her sleeve.

Scenic designer Anna Louizos has imbued the Sheryl and Harvey White Theatre-in-the-round with mid-century furnishings in varying shades of purple underscoring the passion at the heart of this drama. Examples of crown molding and carved door heads suspended above the stage convincingly evoke a 19th century London townhouse. Audience proximity to the stage is all the better to appreciate the costume designs by Ryan Park: Impeccably tailored double-breasted suits for the gentlemen; nipped-waist day suits with knife-pleat skirts for the ladies and lavish evening gowns with no detail overlooked including the seamed silk stockings.