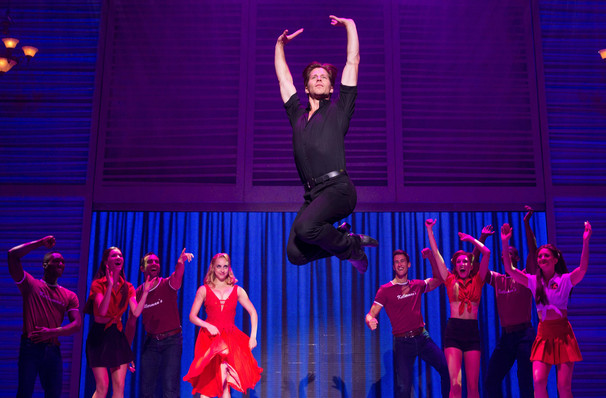 “Nobody puts baby in a corner!” the iconic line from “Dirty Dancing,” may have earned itself a place as the universal cry for women’s rights. That the show’s working class protagonist, Johnny Castle, speaks the line, poses no problem. On the contrary, it elevates him to his rightful place in this borscht belt-set class conflict classic, because it springs from his realization that to defy the boss by defending your job and right to a private life, turns you into the real man you may feel has otherwise gone missing. You don’t have to be a feminist; you don’t have to have read Judith Butler or Frederick Engels. Whatever corner of whatever nation one comes from, whatever one’s sex or age, the response to Johnny’s pithy, heartfelt manifesto is satisfyingly visceral, and is currently going viral.

Those six words have launched the show on a metaphoric manège around the world. It began in 2009 as a touring hit that reaped all the rewards of Broadway, without having been authenticated by even one appearance there! The San Francisco audience was prepared to love it from the moment the house lights dimmed. Its raison d’être is its wholesale celebration of standing by your class and convictions. It offers homage to the pre-Uber era, before workers were repurposed as “associates” so that bosses could avoid paying them union wages.

How can something so right be so anomalous? “Dirty Dancing” doesn’t follow the well-trod path of book-to-play-to movie. Instead, it’s a remake of the movie by the script’s author, Eleanor Bergstein, adhering to the original, word for word, albeit in the reduced circumstances of a smaller footprint and budget. If production values now look parsimonious, the vision and scope have become larger, with new material added that introduces the role of the civil rights and anti-Vietnam War movements in the shaping of the female protagonist Baby’s social outlook.

It is tempting to see a linear plot in it, built around a teenage girl’s coming of age in the summer of 1963, but that is mere armature. The real story is in the presaging of the youth radicalization, a seedpod that would split open in 1965, after the assassination of Malcolm X. It matured in 1968, in France and Czechoslovakia, and in 1969, in Italy, when raised fist general strikers called for a revolution. It burst into full flower in1970 in the United States, with the campus response to the mining of the harbors of Hanoi and Haiphong, ending in National Guard units slaughtering student protesters at Kent and Jackson State. It was as if the Victorian values and petty bourgeois pipe dreams of the one unfettered “prosperity” decade in U.S. history—the 1950s—were shed right there on the stage. Left in tatters were the illusions harbored by those who clawed their way out of the working class. They had so earnestly hoped to impress them into service among their young.

Ketterman’s, a Catskill resort, presumed Jewish in composition, is an early 1960s microcosm of U.S. culture and its attendant class divisions. In this respect, the film offered a more faithful representation than the show. In the film, there were no Black people among the guests, and the rogue Black or Puerto Rican employee was a janitor, chambermaid, or entertainer. In the stage version, several black dancers are among the chorines and “mangenues.” Ensemble member Adrienne Walker sings a haunting rendition of the civil rights ballad, “We Shall Overcome,” while Jerome Harmann-Hardeman, whose role is more fully elaborated in this version, plays the bandleader Tito Suarez, Max Ketterman’s confidante-cum-Sancho Panza. On the one hand, such additions whitewash the era, presenting it as if desegregation was advancing at a galloping pace, even before the 1964 Civil Rights Bill had seen the light of day. On the other, it opens the show up to inclusion of non-white talent, which the movie version did not do.

The setting is a utopia for middle layer wannabes. They have run roughshod over each other to “escape” the working class. Ketterman’s is as counterfeit as the self-important notions that guests and management conspire to unpack. In a two-hour span, we come to see that dancing is Ketterman’s least dirty activity. As Baby folds herself into the back-of-house scene, where employees dance sensually, she learns that the waiter, harvested by Ketterman’s from the hallowed halls of his Ivy League university, has impregnated Penny Johnson, the lead dancer. Without disclosing the down-lo details she has been privy to, Baby finesses her honorable standing with her father to secure enough money to pay for Penny’s illegal abortion. Also, Baby volunteers to understudy for Penny in a dance routine with Johnny Castle at Sheldrake’s, another hotel. Penny’s back alley abortion is botched. Baby must now rely on help from her doctor father to save Penny’s life. Dr. Houseman assumes that Johnny is the offending impregnator, and warns Baby to stay away from him, and Johnny from Baby. In fact, it is the above-reproach waiter who was the knocker upper. As Penny’s crisis plays out and is resolved, Johnny glimpses Baby’s depth, and she sees in him a corresponding strength of character.

Steamy dance lessons are the medium for kindling a mutual, if more penetrating kind of enchantment. What wins Johnny’s heart is Baby’s mind—her ringing endorsement of activism, her urging him to see it as the winning of rights he and she already have that others don’t. Convinced that he has few rights, he has to consider Baby’s words carefully. Then, coming to see that there are bigger forces at work in the tiers of privilege built into social class, he lets Baby, now the woman he calls by her birth name, Frances, lead him to a more informed understanding of the world.

This thread in the story risks going precious, until Baby exposes her father’s hypocrisy. On the one hand, Dr. Houseman is an ardent supporter of civil rights. He wants to see his daughter Baby “change the world.” On the other, he speaks contemptuously of Johnny and his coworkers, who are in Baby’s view, the only force in society that can bring about genuine change. Dr. Houseman claims to want to protect his daughters from “those people,” whose hardscrabble way of life he worked hard to escape. She counters by pointing out that rather than bonding with Johnny, her father would have her change the world by marrying an Ivy League doctor or lawyer—cut from the same cloth as the cynics who wait tables at Ketterman’s and impregnate the help. How can Baby’s father respect the spineless, conniving middle class guests more than the hardworking dancers who demonstrate backbone and patience in their every day transactions? Can’t he see that they change their views not faddishly, but in a serious way, and show grace under fire, displaying the traits of those who have a stake in changing the world?

The show follows the movie libretto so closely that it’s impossible not to compare the two casts. Christopher Tierney as Johnny Castle is the requisite “hunk,” but “Hungry Eyes” notwithstanding, we don’t always see the wrenching conflict that burns through the show from start to finish in Patrick Swayze’s movie portrayal. As a dancer, Tierney is a good technician, but holds back from the attack that Swayze unleashed. Of course, shooting dance segments on film, with breaks in between, makes for a more forgiving regimen than dancing for two hours on a stage. Rachel Boone as Frances “Baby” Houseman, is fully mimetic in reproducing Jennifer Grey’s spinal stiffness and “spaghetti” arms in the initial dance attempts. In the finale her character deserves to go for more full-out dancing, even if it means letting go of Baby’s self doubt. The same goes for the rest of the cast. Less strobe (Lighting Design: Tim Mitchell) to blind the audience, and a higher pitch of dancing might compensate for scant stage space and a smallish cast.

The biggest surprise came as we left the theater, and saw that the cacophony of hooting and hollering, whistling and cheering, came not from the generation of boomers we assumed predominated in the house, but a tsunami of 20-somethings. They clearly hold Baby in the highest regard, and you could even venture to say (all proportions guarded), nearly on a par with the likes of Malala.