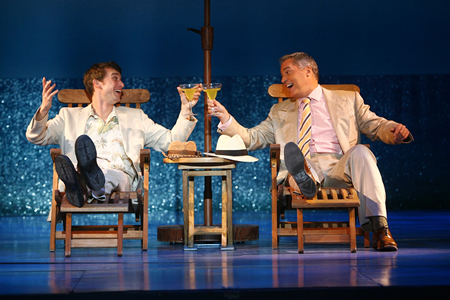 Once upon a time, in Beaumont sur Mer, a charming seaside resort on the French Riviera that seems a lot like Monte Carlo without the hordes of tourists with cameras, there lived a con man. Actually, two of them but let’s not get ahead of ourselves. Laurence Jameson (Tom Hewitt) has been fleecing wealthy lady visitors – with the full cooperation of his junior partner, the corrupt chief of police (Drew McVety) – for years. Posing as the deposed prince (the chief pronounces it “prance” in the French fashion, leading to some nifty word-play in the first act) of a small country, he romances them, takes their donations of money and jewels for the revolution and sees them off at the railway station with a rosebud in his lapel and a tear in his eye. All fake, except for maybe the rose.

His winning ways have bought the suave charlatan an imposing villa with all the trimmings and all seems to be going swimmingly until the arrival of Freddy (D.B. Bonds in the role that earned Norbert Leo Butz a 2005 Tony). Freddy is as crude as Laurence is smooth but he has the advantage of youth, plus boundless energy and ruthless ambition. He wants what Laurence has (the hilarious “Great Big Stuff”). After blackmailing the older man into taking him on as a protégé, Freddy and Laurence work briefly as a team, with Freddy impersonating the prince’s idiot brother, a real turnoff to a pushy Oklahoma oil heiress with marriage on her mind. But this town still isn’t big enough for the both of them. Heiress dispatched, the pair wager the future on a bet: the one who can extract $50,000 from Christine Colgate “The American Soap Queen,” (a delightfully ditsy Laura Marie Duncan) gets the territory and the other gets out of Dodge.

Anybody who has seen the 1988 hit movie, starring Steve Martin and Michael Caine – and anybody who hasn’t, should – knows how the rest of the story goes. The con men con each other, as well as their mark, and are conned in turn. The musical version, by David Yazbek with book by Jeffrey Lane, adds a subplot, involving a romance between the klutzy police chief and one of Laurence’s castoffs who won’t leave town, and it’s one of the more delightful aspects of the show. Hollis Resnik, long a shining star on the Chicago regional theater scene, is delightful as Muriel from Omaha who begins by being smitten with the prince and then finds true love with the chief at the bottom of a shared bottle of champagne.

It’s all pretty funny, if slapstick and silly, and delivered up in a slick Broadway style. Yazbek, who did the score for “The Full Monty,” has written a series of tunes that are upbeat and appropriate to the plot but eminently forgettable as soon as you walk out of the theater. The principals, including Jennifer Foote as the oil heiress, belt them out with gusto, as does the singing/dancing chorus of French maids, bellboys and hotel guests. Hewitt and Bonds play off each other like the old pros they are, with Bonds getting the lion’s share of the laughs as mad Prince Ruprecht and, later, a supposedly paralyzed soldier who tries to get $50,000 off the (seemingly) innocent Christine for the essential psychotherapy that will cure him. What a surprise when an esteemed Viennese shrink shows up at the very same hotel. Guess who?

It’s a brassy, glitzy crowd-pleaser and, if there’s not a whole lot of “there” there, well, nobody promised you “War and Peace.” One doesn’t go to Beaumont sur Mer to think after all. You just check in, hand your Louis Vuitton luggage to the bellboy and grab a glass of bubbly darling. Only watch out for the fake prince lurking behind that fake palm tree.