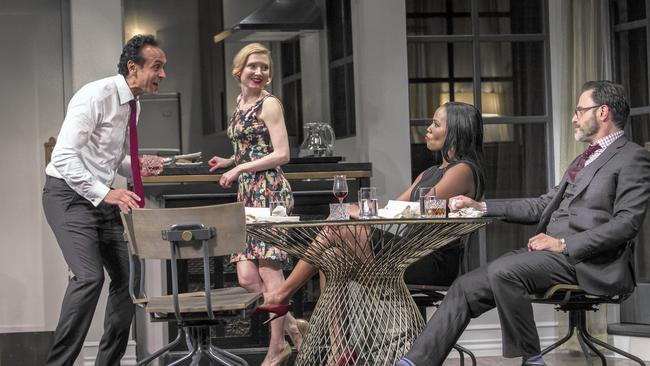 “Disgraced” won a 2013 Pulitzer Prize for playwright Ayad Akhtar. But that doesn’t mean you won’t be squirming in your seat in mental discomfort as the 85-minute play progresses. The play tackles questions of Islamaphobia, Muslim-American identity and identity politics in general. The smartly written script offers equal-opportunity political incorrectness and something to offend everyone.

Kimberly Senior, who has directed “Disgraced” since its first production in Chicago at American Theater Company in 2012, directs Goodman’s new production. She directed its Lincoln Center debut in late 2012 and then its Broadway production in 2014. Since then, it has become one of the most-produced plays in the country.

“Disgraced” is an entertaining, fast-moving story about two successful New York couples at an elegant Upper East Side dinner party. (The diversity of the four characters is only slightly unlikely.) Amir (Bernard White) is an M&A lawyer for a large Wall Street firm, on the verge of being named a partner. His wife, Emily (Nisi Sturgis) is a painter smitten with the beauty and wisdom of Islamic art. As the play opens, Amir is posing (shirt, tie, jacket, no trousers) for Emily’s portrait reminiscent of a Velasquez painting of his slave/assistant.

It happens that Amir is a lapsed Muslim, whose parents were Pakistani (although he claims Indian heritage, based on the lines drawn in the 1947 partition). Emily is blond, fair and all-American. Amir’s life is complicated by his nephew Abe’s (Behzad Dabu) plea for him to join the defense team for an imprisoned imam. Their dinner guests that evening arrive to celebrate the acceptance of Emily’s work in a show curated by Isaac (J. Anthony Crane), a Jewish art dealer. His African–American wife, Jory (Zakiya Young) is a tough, aggressive lawyer in Amir’s firm. (She has a Henry Kissinger quote above her desk.)

Those are the ingredients in what is at first light-hearted dialogue about sports and pastries, shop talk between Amir and Jory, and art talk between Emily and Isaac. The conversation gradually becomes heated with discussions about the meaning of the Quran and the Muslim faith. Eventually, secrets are bared and it turns out everyone was deceiving everyone else about something all along.

The elements of betrayal result in an eruption of anger, the departure of the guests and an attack of domestic violence. In the ambiguous ending, Amir finally views the portrait.

The structure of “Disgraced” is reminiscent of other plays about two-couple altercations. In Yasmina Reza’s “God of Carnage,” two couples fight bitterly over their children. In Donald Margulies’ “Dinner with Friends,” one couple’s divorce nearly tears the other couple apart. In Lisa D’Amour’s “Detroit” and in Terrence McNally’s “Lips Together, Teeth Apart,” shaky marriages and inequality create pain and drama.

The production of “Disgraced” is marked by smart direction and brisk timing to keep the dialogue moving along as the playwright intended. Senior’s experience with this script is evident in the smooth direction and pacing. The performances are all excellent. If the actors’ names are not familiar, it’s because the four leads are New York-based. Only Dabu is a Chicago actor.

John Lee Beatty’s lavish set design, mimicking an Upper East Side apartment, is gorgeous; you may want to move in immediately. A lightning quick scene change transforms the apartment for its final scene. Christine A. Binder’s lighting design signals time and season changes subtly as scenes progress. The art is all-important on this set as Emily’s large blue-and-white mosaic painting suggests Islamic imagery and other pieces represent Asian and South Asian art.