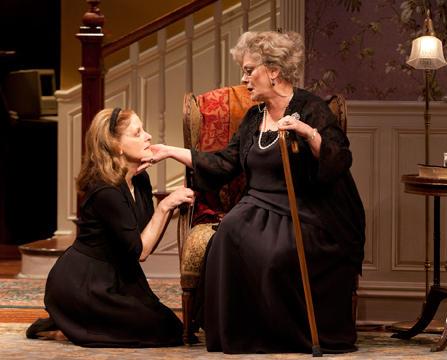 “It’s money that matters,” or so sang Randy Newman. The song would make suitable background music for Horton Foote’s Tony-nominated “Dividing the Estate,” which delves into a family’s uneasy relationship with money.

Set in Harrison, Texas in 1987, the play revolves around the mildly dysfunctional Gordon family — faded southern aristocracy who are culture-rich but cash poor. They still have land, though, and a very nice house in which to argue over what to do with those assets.

The “we will not divide” faction is led by matriarch Stella Gordon, ably played by Elizabeth Ashley. She is joined in this firm opinion by her daughter Lucille (Penny Fuller) and Lucille’s son, who is simply called Son (Devon Abner).

On the opposite side are Stella’s other children, Lewis (Horton Foote Jr.), Mary Jo (Hollie Foote) and her husband, Bob (James DeMarse). Lewis is a drinker, gambler and jobless, which means he must borrow heavily against his share of the estate. Mary Jo and Bob must also borrow to finance their extravagant lifestyle and spoiled daughters, Emily and Sissie (Jenny Dare Paulin and Nicole Lowrence). Mary Jo flies around the house in near-hysterics, while Bob devises various gambits to convince Stella to do the “right” thing.

So why won’t Stella divide the estate? That’s not entirely clear, though it may have something to do with her sentimental attachment to the past. There is a lot of discussion of the past, as you’d expect from fading aristocrats. In any case, the factions go round and round, thrusting and parrying, less intent on resolving the issue than continuing the argument.

The cast is rounded out by the servants: Doug (Roger Robinson), Mildred (Pat Bowie) and Cathleen (Keiana Richàrd). Robinson shines as the cantankerous 92-year-old, who refuses to retire and sparks many of Stella’s memories. (Kudos to the Old Globe for providing a family tree in the program to sort through all these relationships.)

Through it all, Son does whatever his mother and grandmother tell him to do. Abner does a nice job as the only subtle character in the menagerie. However, the casting is a bit jarring, as Son appears to be older than his uncle Lewis. Son’s girlfriend, Pauline (Kelly McAndrew), is a welcome addition as she awkwardly tries to fit in.

All the action takes place in the living room/dining room of the Gordon house, magnificently rendered by Jeff Cowie. Wilson’s direction is quick and to the point and the chemistry between the large cast is good.

Overall, the production seems hampered by the one-note story. And though there are amusing moments, especially Mary Jo’s histrionics, they don’t quite balance the repetitive narrative.