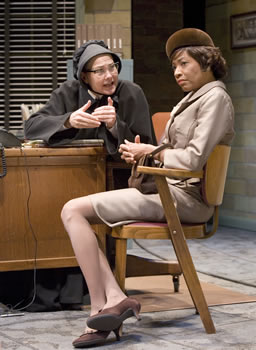 John Patrick Shanley had the last laugh on whoever threw him out of the kindergarten at St. Helena’s in the Bronx and later, expelled him from Cardinal Spellman High School. The prolific playwright and Oscar-winning screenwriter (“Moonstruck”) has a hit in “Doubt,” which, at least on the surface, tackles the hot-button topic of sex scandal in the Catholic priesthood and skewers the whole parochial school system along the way. Many people will see “Doubt” as just that – a play about Catholic schools and the real or imagined misconduct of priests.

But the message is in the name and “Doubt” really is about the questioning of oneself and others, as well as certainty and humanity and compassion, which is why it resonates no matter what one’s religious persuasion happens to be. It also touches on innocence – and the loss thereof, whether in an adult or a child.

Sister Aloysius is the principal of a Catholic elementary school in the Bronx circa 1964. She runs things with an eye to detail and a hand of iron. As played by the marvelous Cherry Jones, who won a Tony for the role, she is crabbed, dried up and, except for moments of sarcasm, all but humorless. You wouldn’t want to be sent to her office. Yet, Sister Aloysius has her human side, glimpses of which peek through her dark habit and gloomy habits. She became a nun after her husband was killed in the Second World War. She gardens. She really cares about the physical and spiritual welfare of the children in her charge. And she is devoted to the Church and its rigid hierarchies. Unfortunately, the occasional softness is not enough to blunt her sharp edges and, when she goes after something she pursues it with the tenacity of a pit bull.

Her target of the moment is Father Flynn, a young, personable priest played with passion, humor and a lovely Bronx accent by Chris McGarry, also of the Broadway cast. Sister Aloysius has put Father Flynn on her hit list for a number of reasons: he uses a ball point pen, puts too much sugar in his tea, plays and coaches basketball and wears his nails a tad long because, as he notes, he likes them that way. Worst of all, he is a progressive educator who reaches out to his students with love.

Caught in the middle of the Aloysius/Flynn conflict is Sister James (Lisa Joyce), a young teacher who, after much browbeating by the older nun, reports slightly unusual behavior on the part of one of her students, an isolated African American boy, new to the school and singled out for Father Flynn’s special attention. Is he simply being kind to the troubled youth (his line) or does he have a nefarious purpose that could endanger other children, as the principal suspects? “Innocence can only exist in a world without evil,” she is told by Sister Aloysius who berates Sister James for her own lack of guile and closeness to the children.

The final member of the cast is the boy’s mother, skillfully played by Adriane Lenox in a small but telling role. Called into the principal’s office as a pawn in the plot to promote the downfall of the priest, Mrs. Muller turns the tables. She’s seen too much in her life. Innocence is no longer a question. She thinks her son is “that way” anyway. Her husband beats the boy unmercifully. The kid is headed for trouble and Father Flynn is the only positive male role model in his life. Couldn’t they all just hold on until June so he can graduate, get into a decent high school, maybe even college and start a new life? Set on her own goals, she refuses to be manipulated by the principal. Upon her exit, one is tempted to applaud.

These are the elements of a tight 90-minute roller coaster that leaves you rather dizzy in its twists and turns. In the end, all “Doubt” gives you is its title. But it has been quite a ride.