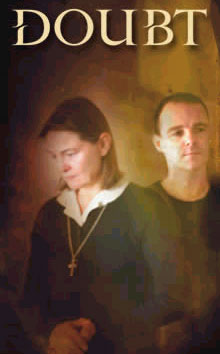 Doubt is a spellbinding and expertly written new play from John Patrick Shanley. In a season awash with tepid revivals, over-amplified musicals, and Hollywood stars doing their &#147;legit&#148; gigs, Doubt renews your faith in the theater with an excellent story that keeps you guessing to the end, terrific writing and great acting from two of the theater&#146;s best.

Who needs Hollywood stars when the likes of Cherry Jones and Brian F. O&#146;Byrne are available? It is their expertly crafted performances which make Doubt a truly unforgettable experience. The two clash, provoke and attack each other with a ferocity not seen on a New York stage since Helen Mirren and Ian McKellen in Dance of Death.

The plot involves a Catholic grammar school and the possible misbehavior of Father Flynn (O&#146;Byrne), a popular priest in the parish who coaches boy&#146;s basketball and befriends its troubled students. Despite its ripped-from-the-headlines scenario, the play actually takes place in 1964, right around the time of the Vatican II reforms.Flynn&#146;s demeanor seems at first perfectly innocent, showing him to be a more contemporary spiritual leader in stark contrast to Jones&#146; indefatigable school principal, Sister Aloysius.She, having her doubts about the moral character of the priest, recruits the young, na�ve Sister James to (an appropriately jittery Heather Goldenhersch) to keep her ear close to the ground.When Sister James comes to her over a strange occurrence involving Father Flynn and a student with alcohol on his breath, the school principal has all the confirmation she needs for her suspicions.

What follows is an explosive cat-and-mouse game between Sister Aloysius and Father Flynn. Although Flynn provides her with more information about the incident, the relentless nun refuses to accept what seems to be a reasonable explanation.At first, it seems she is on a witch-hunt of sorts. But her continued probing into Flynn&#146;s background provides further details to fuel her beliefs.Jones is at the top of her form portraying the unforgiving nun who runs her school like a totalitarian state.Told that the students fear her, she is pleased.With facial features set into a steely mask and posture so straight that she might very well be wearing a back brace, Jones&#146; Aloysius shows no pity for the likeable Flynn as she sets out to destroy him for the sin she believes, beyond a shadow of a doubt, he has committed. Unflinching and with an almost chilling conviction, she delivers the performance of a lifetime.

And O&#146;Byrne is every bit her equal.Banishing his Irish brogue in favor of an outer-borough accent, he is perfectly cast as the affable priest struggling to save his reputation.His nuanced performance shows him as a priest determined to be not just a spiritual leader and preacher, but also friend and confidante.He shows just enough assurance in his spot in the church&#146;s pecking order (nuns, after all, can&#146;t accuse priests in such a hierarchy) and in his ability to befriend a congregation that fears his rival, that one can guess one of the reasons Sister Aloysius is hell-bent on his destruction.

Their confrontations, especially one fireworks-laden scene late in the play, keep the audience on the edge of its seat. But don&#146;t expect a clear resolution to the play; Shanley has slyly and deliberately crafted it to be ambiguous.Father Flynn may or may not be a pedophile.Sister Aloysius seems to be a zealot; she may also well be justified in her crusade.Doubt does indeed prevail at the end but the result is a provocative, thoroughly engaging piece of theatre.