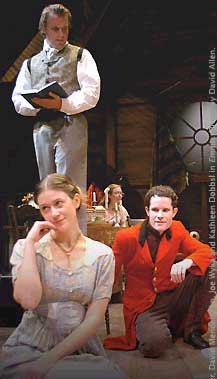 Manners, marriage, money and mobility (social and in an upward direction)–that&#146;s what a Jane Austen novel is made of. And, although some two centuries have passed since she surreptitiously scribbled her books under the guise of reading at her desk, not much has changed (except maybe our manners or lack thereof). She only wrote six books, two of which were published posthumously, and has achieved more fame in the past ten years than she ever did in her lifetime. Austen died in 1817 at the age of 42.

Although admired by such notables as Sir Walter Scott, Disraeli and Virginia Woolf, Jane Austen achieved her current &#147;blockbuster&#148; status only recently through movies and television. First came Ang Lee&#146;s highly-touted Sense and Sensibility, starring Emma Thompson and Hugh Grant, not yet fallen from grace. But the 1996 BBC version of Pride and Prejudice, later broadcast in this country on A&E, with the hunky, brooding Colin Firth as Mr. Darcy, was the rocket that catapulted Austen to rock star status. That same year, emerging superstar Alicia Silverstone played an updated version of Emma in the hit movie Clueless. A year later, already-arrived superstar Gwyneth Paltrow played Emma straight up.

Emma is unique among Austen&#146;s genteel heroines in that she is seriously flawed. A spunky lass, from a moderately privileged household, she has a decidedly high opinion of herself and is a determined matchmaker, meddling shamelessly in the lives of others with little or no insight into her own. Yet, she has an undeniable charm. British playwright Michael Fry has brought an adaptation of the novel to the stage and, as presented at the intimate Aurora Theatre in Berkeley, Emma&#146;s charm is transmitted very well.

Fry&#146;s conceit, framing Austen&#146;s tale in a fairly modern setting where five young people decide to stage the story in an attic on a rainy afternoon, allows a handful of actors to play thirteen different characters, changing in an instant with the aid of wigs and shawls and walking sticks. A wine glass serves as an ear-trumpet and, when there aren&#146;t enough actors to go around, someone drapes a boa around a dress form or puts a hat on a mop to swell the scene. This, in itself, lends humor to the already-amusing plot.

When one of the players overacts shamelessly &#150; as does David Mendelsohn as three suitors, the prissy cleric Elton, the hayseed farmer Martin and the dashing cavalier, Frank Churchill &#150; one is reminded that these are kids, putting on a play. Lindsay Benner, elegant as Emma&#146;s friend and former governess Mrs. Weston and the mysterious Jane Fairfax, hams it up as Emma&#146;s father. Kathleen Dobbs brings just the right touch of garrulous hysteria to the spinster Miss Bates and the snobbish Mrs. Elton but simpers as Harriet, the object of Emma&#146;s ceaseless matchmaking aims. Only two of the actors play it fairly straight and they are superbly cast. Lauren Grace is a perfect Emma and Joe Wyka a Mr. Knightley, deserving of the name. The penultimate scene when Knightley, the old friend-turned suitor, confesses his love for Emma, is mesmerizing. The cluttered attic and all its silliness fades away in the candlelit glow of two people in love.

Jeffrey Bihr both directed and composed the incidental music for the show and J.B. Wilson designed the appropriately messy set. Costumes, mostly thrown on over the players-within-a play&#146;s street clothes, are by Cassandra Carpenter. It&#146;s a little choppy in parts but mostly it works. Had Jane Austen been in the audience, she would have been quietly pleased, in an appropriately genteel way.