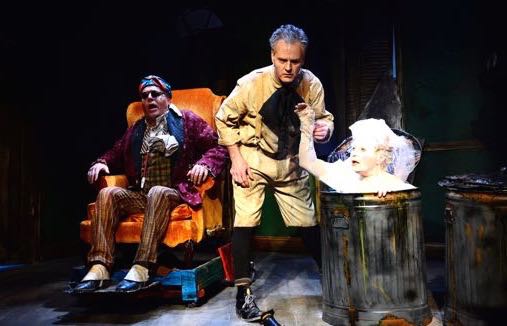 The term “black humor” could have been invented to describe Samuel Beckett’s mid-century play, “Endgame”. Its humor is grotesque, absurd, sometimes cruel. But humor nevertheless. And the new Hypocrites production takes full advantage of all those aspects of the human comedy. It’s 90 minutes with four wounded souls in an apocalyptic setting, the “endgame” of the title.

Fans of Beckett’s work may wonder what’s in store when they enter the Hypocrites’ space on Milwaukee Avenue in the trendy Wicker Park neighborhood. It’s decked out like a carnival or a cabaret with playground toys, tiny pendant lights and hanging toys. Candles, party hats and candy sit on the bar in front of each row of seats. The walk-in music is a tape of French pop songs. A set of pink illustrated wooden folding doors enclose the stage and are folded open by a crew member as the play begins.

Elizabeth Bracken’s scenic design and Jessica Kuehnau Wardell’s costuming enliven the tiny room where the play takes place. Hamm (Kurt Ehrmann), who is blind and unable to walk, is enthroned in a large colorful chair on casters. His wears a brightly colored toque and a multilayered dressing gown. He issues commands by blowing his whistle. Clov (Brian Shaw), his servant (and possibly his son, we learn later) hobbles around and is unable to sit. His choreographed efforts to climb the ladder to see outside are humorously done—and frequently repeated.

The endgame is this. Hamm asks again and again “Is it time for my painkiller?” and Clov always says no. “Why don’t you kill me?”he asks Clov. “I don’t have the combination for the cupboard,” Clov responds. Clov spends time in his kitchen. “What do you do there?” Hamm asks. “I look at the wall … I see my light dying.” And later, he reports, after looking out the high window, there are no gulls, no waves, no tides, no sea, no sun in the world.

Two trash bins sit on the stage, home to Hamm’s parents, Nagg (Sean Sinitski) and Nell (Donna McGough). They are both dressed for a fancy ball. Nagg in a top hat and Nell in a bridal gown. Occasionally, Clov lifts the lid of the cans and they appear. Nagg tells a story. He and Nell reminisce about a lovely time on Lake Como. The sweetest scene is when they try to kiss but are unable to reach each other. When they drop into their bins, Clov covers them up. Hamm asks, “Are they bottled now?”

Ultimately Clov does what he has always threatened to do. He prepares to leave, and appears dressed for travel in a white blazer trimmed in turquoise, a straw boater similarly trimmed, his valise and umbrella. He is ready to go but doesn’t quite make it. Hamm intones, “And now? Moments for nothing, now as always, time was never and time was over, reckoning closed and story ended.”

The 90-minute play is skillfully directed by Halena Kays, carefully following Beckett’s stage directions—to which the playwright demanded full compliance. The performances by all four actors are superb. The festive cabaret atmosphere of the venue makes the black absurdity of the play more profound.