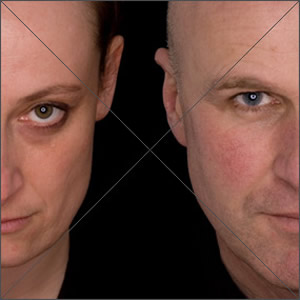 Presented as part of the Ulster Bank Dublin Theatre Festival

Directed by Karl James and a Smith

There is an ethical ponderable at the heart of Tim Crouch’s England, a site-specific two-hander that challenges its audience to contemplate the value of art itself, and it proves to be entirely at the expense of the audience.

The action takes place in some kind of art gallery. The details vary depending on where the production takes place. In Dublin, it took place at the Dublin City Art Gallery, also known as The Hugh Lane Gallery. As such when the actors appear (Crouch himself and Hannah Ringham), they provide a brief history of the venue and seem to honour its history. As the play progresses, the audience is taken through a number of rooms in the gallery and introduced briefly to some of the art.

But this is all a feint. After a duologue in which the two actors recite what seems an internal monologue by a single character about their wealthy, art-loving boyfriend and their own ill health, the play deals its trump card. All of the ruminations about the nature of art, all the history and culture of the venue you are standing in, all of the pretentions of the theatre-goer are directly attacked by an ethical drama regarding how the character’s health difficulties have been resolved at the cost of the life of another person. If you want the detail – the unwell lover of the art-dealing millionaire gets a heart transplant from a middle-eastern youth whose death may or may not have been entirely necessary.

It’s a strong metaphor, yes. It’s a provocative move (literalised by a move in the venue and performance space from having the audience stand as if being guided through the venue to sitting in seats as if observing an ordinary play), yes – give us art, real art, then show us how valueless it really is. But it’s also painfully self-aware and self-involved, fairly boring for the most part, and woefully overextended even at just over an hour. The only justification for the use of the space – the much vaunted site-specivity – is to poke a finger in the eye of (western, imperial) culture itself. While this might not be such an issue if you are not adverse to a bit of eye-poking, the deeper problem is that as a play, the use of the venue serves no other function whatsoever.

As a play, Crouch’s text is as effectively heard as seen delivered. His staccato poetry, rhyming and chiming voices interrupting, repeating, intermingling to create a stream of consciousness (later contrasted when the voices finally represent two characters, one of whom is translating for another that is not ‘heard’) is really ideally suited to radio. It is really an aural work, and its repeated mantra “look” and frequent exhortations to envision places and spaces beyond the venue space itself deliberately, ironically, nullify the value of venue in which you experience the play.

Again, bravo in terms of aesthetic concept perhaps, but apart from the initial (gestural) honorifics to the venue and the artists housed there, there is no compelling need whatsoever to see Crouch and Ringham perform in any space, let alone a specific space, from either a dramatic or a textual point of view. As if acknowledging this in some way, their performances are mostly carried out in a kind of ecstatic daze, as if they’ve just taken pills or found a religion which make them incapable of any kind of expression other than joy. Though this is supposed to lend weight to the final scenes where more desperation creeps in, it doesn’t. Again, the voices are doing the work through Crouch’s written word, and there’s no reason at all to be in a shared physical space with these performers beyond pure metatheatrical rhetoric.

How much patience you will have for this deliberate mischievousness will perhaps depend on your predisposition to Crouch’s work, the endurance of your feet, and how hilariously ironic you find the use of the chosen art gallery or other venue. The play has already been a significant success and won awards, and it is due to tour through 2009. But the point, though compelling, is made quickly once finally made and the journey to get there is not as interesting as it sounds.