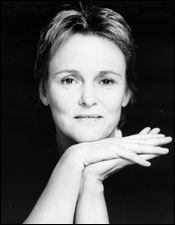 Shelagh Stephenson’s previous works The Memory of Water and Five Kinds of Silence both featured characters haunted by the absence of family members. In both plays a character who exerted powerful influence in the past but who was now deceased was nonetheless constantly present, both in dialogue and, in both cases, as a ghostly character composited from symbolism and memory.

Stephenson’s new play, Enlightenment, begins with another variant on the same theme as mother Lia (Ingrid Cragie) and stepfather Nick (Mark Lambert) anxiously await news of their son Adam, vanished many months hence in the Far East. They presume he is dead, though they can&#146;t quite face the reality of this, so much so that Lia has turned to dotty spiritualist Mrs. Tindle (Jan Carey) for insight.

Though well acted and sharply written, the first act largely covers familiar ground as the characters contemplate absence, loss and uncertainty, searching for structure and meaning in the perennially irresolvable narrative of their lives. The action steps up a gear when the vanished youth is seemingly found.

Where Act One is largely contemplative, Act Two evolves into a Brimstone & Treacle type psychodrama. The young man, as it turns out an apparent amnesiac in possession of Adam&#146;s personal papers, is taken in by Lia and a reluctant Nick and slowly reveals his darker side. This changes the game for everyone: playwright, characters, and audience. The play suddenly becomes a suspense drama, the shift in genre triggered by the active presence of a character previously safely contained by his distance from events.

With each movement towards outright grand guignol (which comes with a converse movement towards minimalism in set decoration and lighting as props are systematically removed from the stage), the play brings its own thematic concerns into focus through a different generic lens. It is still a play about absence, but now the reason for the original absence (terror in the world – the son vanished after the Bali and Jakarta bombings) becomes a living, destructive force present in the home of its central characters (terrorized by a psychopath). The search for meaning goes on, but with more urgency as the personality, motives, and ultimate goal of this mysterious stranger force the other characters to face their prejudices, preconceptions and fears.

Stephenson claims that the play should be seen as "a tragedy played as comedy," and there is a blackly comic thread running through both acts. Audience skepticism is invited by the characterizations of the spiritualist and an odious journalist played by Amy Marston, both of whom may be either outright liars or utterly self-deluded. Lia&#146;s attempt to de-clutter her life and find a pure center where she can be free of her anxieties (which explains why the set is stripped bare) is also shown to be an act of desperation. Her self-absorption and desire to &#145;do right&#146; by taking this surrogate son into her life is shown to be non-productive, ultimately only leading to another form of trauma.

Enlightenment is well performed and moves at a swift pace. Craigie sustains a sense of inner tension mixing hope and despair which eventually turns to fury, giving a measured, well-developed characterization. Marston is appropriately despicable as the self-centered journalist, and Christopher Adlington manages to become more sinister by degrees with convincing ease as the ersatz Adam.

Director Ben Barnes sustains the tension throughout both acts by using the increasingly bare stage to move his cast around, and Rupert Murray&#146;s lighting is given a central role by Stephenson&#146;s explicit script instructions that "The effect should be a cross between a Bill Viola video installation and a Dutch interior. By the end, the room is an empty box, lit like light inside an eggshell."

Though it is a concoction of familiar elements both thematically and stylistically, the overall result is provocative and funny enough to be of interest. The play is of particular interest relative to Stephenson&#146;s other work though. It is cheerily and darkly extroverted where The Memory of Water and Five Kinds of Silence were introverted, and though this has no bearing on its value, it does give pause for thought.

(21461)
$3.61 (as of January 27, 2021 - More infoProduct prices and availability are accurate as of the date/time indicated and are subject to change. Any price and availability information displayed on [relevant Amazon Site(s), as applicable] at the time of purchase will apply to the purchase of this product.)

(26074)
$23.81 (as of January 27, 2021 - More infoProduct prices and availability are accurate as of the date/time indicated and are subject to change. Any price and availability information displayed on [relevant Amazon Site(s), as applicable] at the time of purchase will apply to the purchase of this product.)

(9820)
$4.50 (as of January 27, 2021 - More infoProduct prices and availability are accurate as of the date/time indicated and are subject to change. Any price and availability information displayed on [relevant Amazon Site(s), as applicable] at the time of purchase will apply to the purchase of this product.)
related posts