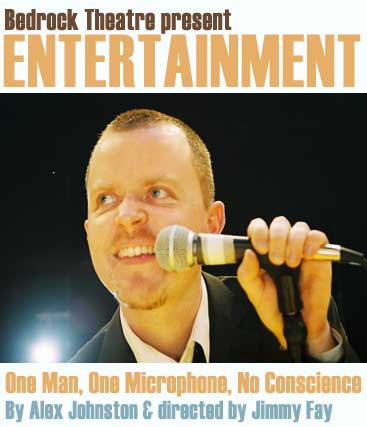 Ruminations on life, death, conscience and morality are presented in the form of a self-reflexive stand-up routine by writer and performer Alex Johnston. Touted as a &#145;play&#146; and &#145;directed&#146; by Bedrock Theatre Company Artistic Director Jimmy Fay, Entertainment is essentially a philosophical composition in Dialogue form. It presents an intentionally fractured central narrative punctuated with self-proclaimed &#145;rants&#146; on not unrelated topics. The most significant recurring element is Johnston&#146;s relationship with his Lutheran preacher father, a character whose life story provides the &#145;other&#146; for the &#145;Dialogue&#146; at its center.

By the time the routine has ended, the elder Johnston has gone from a paternal authority figure to something more ambiguous, an almost abstract dream-image who resorts to a cheesy Jackie Mason-like accent (in spite of his racial and religious backgrounds) to question his son&#146;s sense of moral authority and disappears with an enigmatic and unexplained riddle spoken in German, a language which Alex does not speak. "Tell me what it means," pleads Alex, "What does it mean?" he repeats – but there is no answer.

The performance begins with a short film shot by Fay in which Johnston is first seen walking through the woods, which, we are told by a helpful extra holding a piece of cardboard with text scrawled on it, represents doubt. To the gentle musical strains of AC/DC, Johnston then pursues a girl "you never got off with" through the trees, eventually finding his way to a hand-written sign directing him to the stage. "The Live Bit" begins with a pause, as the performer walks on and stares disapprovingly at the audience before walking off again, leaving the stage empty. This kind of deconstructive, ironic theatricality continues throughout, and creates ambiguous spaces that challenge the audience to find an appropriate response. The most usual response is laughter, and this is the subject of many of the humorous asides with which Johnston peppers the show.

Though not shockingly original in any respect, the combination of serious political and cultural analysis and black humor is a fairly potent mix. Johnston specifically refers to his literary forebear Jonathan Swift during one extended joke in which he offers a "Modest Proposal" to solve the obesity problem in the United States and the hunger problem in Iraq in one fell swoop. If cross-cultural cannibalism seems an unsuitable topic for an evening&#146;s entertainment, then you are unlikely to appreciate the performer&#146;s insights into Faith, Will, and Justification, which he epitomizes by juxtaposing the tales illustrated by slide shows of a medieval French Knight who specialized in rape, infanticide, and abduction but at least plead guilty when brought to trial, with the story of Dan White and his notorious &#145;Twinkie&#146; defense following the assassination of Harvey Milk. This is not the least of it, and when he produces an apparently authentic Waffen SS diary featuring a section on &#145;wit and humor&#146;, the point about jokes being universal but not universally funny is well taken (even if he eventually reveals said chapter as apocryphal).

Entertainment is a thoughtful piece of writing which probes the process of its own creation both in the personal and more general, formal sense. Exploring his own social and religious roots, Johnston examines Irish attitudes to contemporary politics, likening the Irish to the snickering henchmen in Shane who back up Jack Palance and die anonymously in the final shoot-out. There is bile aplenty in the various sociopolitical rants, and yet by drawing the dialogue back to the central discourse between father and son, society and morality, God and Man, he keeps the routine grounded. He explores his own motivations for performing comedy, and interrogates the social role of humor and the attitudes represented by our capacity and desire to laugh at discomforting thoughts. Is any of it actually funny? Yes: which is not to say that it will appeal to all tastes.

On the whole Johnston carries the routine easily enough. There are many difficult transitions from hysteria to deadpan, and the timing of one-liners and asides is absolutely crucial. Though the playscript suggests that the order of anecdotes is flexible, there is a clear internal structure here (even though he jokes about it by presenting a Lego model to explain it), and the performer is required to be very precise with each segment to maintain balance throughout. He does this even through the final moments where, having wrapped his face in scotch tape, he sings "The Universal" by Britpop band Blur, slowly unwinding the tape in a gesture which may or may not represent liberation through self-expression.