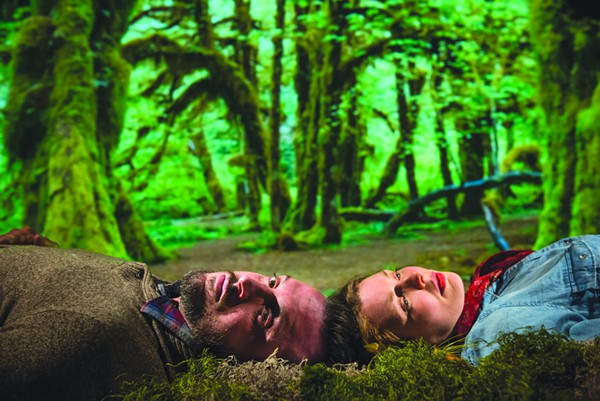 “Little Eyolf,” one of Henrik Ibsen’s lesser plays, has been updated and up-ended by writer and director Mark Jackson in the Aurora Theatre’s world premiere production of “Little Erik.” In re-writing Ibsen’s 1894 plot into a superficially contemporary story about a hard driving executive wife, a mercurial wannabe novelist husband and a disregarded disabled child, Jackson seems to be on the right track until the latter half of the one act 80-minute drama, where all goes awry, as the writing departs spectacularly from Ibsen’s original plot and veers into surprisingly shoddy melodrama.

The eponymous “Little Erik“ (talented Jack Wittmayer) was injured as a baby when he fell off a kitchen table while his parents were making love on the floor. Thus begins the guilt, tension and anger that adds pressure to the couple’s already strained relationship. Mother Joie (pronounced “Joey“ and well-played by Marilee Talkington), a centered and determined tech CEO, never wanted children, but agreed to have one to assuage husband Freddie (Joe Estlack). Freddie is a dreamer with little appreciation for the tech world, except for the money it provides him. He and his half-sister, school teacher, Andi (Mariah Castle) grew up inappropriately close to each other. We learn more about their relationship later in the drama.

When the action of the play begins, Joie, Erik, and Andi are at Joie’s weekend chalet north of San Francisco. The chalet’s architect Bernie (Greg Ayers), Andi’s well-meaning but foolish suitor, seems to wander in and out at will. Freddie, just returning from spending months in Europe not writing his great American novel, announces that he will no longer pursue a writing career and instead, will devote himself to raising Erik.

Into this seemingly realistic family drama enters a malevolent fairy-tale witch, Rat-Wife (nice performance by Wilma Bonet), who enchants rats and little children into following her into the river. Uncharacteristically, the Rat-Wife was Ibsen’s conception, although in “Little Erik“ she is presented as a Latina cleaning lady whom Joie treats cavalierly.

As Freddie emotes self-importantly and Joie and Freddie argue about their relationship, Erik leaves the scene unnoticed and ultimately drowns in the river. As is unfortunately often the case with family tragedies, Freddie, Andi and Joie act out in unpredictable and self-defeating ways. And at the end of the play, there is a startling deus ex machina, which seems more amateurish than dramatic.

“Little Erik” has stimulating sections, particularly, when Joie, excellently acted by Marilee Talkington (“Rapture, Blister, Burn“ and Berkeley Rep’s “X’s & O’s”) articulately explains her lack of maternal instincts. She’s a woman who is true to herself. Here, Mark Jackson’s writing is at its most expressive.

Berkeley theatergoers have had the opportunity to appreciate several plays well-directed by Jackson recently, including the avant-garde “Antigonick” by the Shotgun Players, co-directed by Hope Mohr (2015), “The Letters,” a provoking two-person drama at Aurora’s Harry’s Stage (2014), and Max Frisch’s classic absurdist play “The Arsonists” at Aurora’s main stage (2013). Jackson wrote and directed “Salomania“ at the Aurora in 2004. Certainly, Jackson has appreciable talent. Perhaps in retrospect, using “Little Eyolf“ as a model created more challenges than Ibsen’s play was worth.