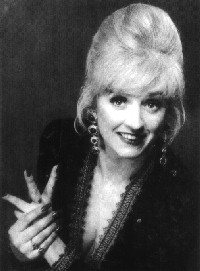 Fascinating Aida are three women whose shows are part cabaret, part review. Their performances are unapologetically old fashioned in style yet utterly contemporary in content. They sing wickedly satirical songs, usually in immaculate three part harmonies, and combine glamour, earthiness and wit in equal proportions. The line up has changed over the years but seems to have reached its apotheosis in Dillie Keane, who co-founded the group in 1983, Adele Anderson, who joined in 1984 and Issy Van Randwyck, who arrived in 1993. They have recently enjoyed success internationally, touring extensively in Australia and New Zealand, and appearing in cabaret at New York’s Firebird Cafe.

The personalities of the performers compliment each other perfectly. Keane is acidic, sexy and touching in equal measure. She writes most of the music, possesses a voice which can switch from airy mezzo to gin soaked rasp at the drop of a key change and plays a mean piano. Anderson is a statuesque chanteuse who somehow manages to blend hauteur and goofiness and writes most of the lyrics with Keane. Van Randwyck is a sex bomb with brains who combines a delightfully pure voice with the demeanour of a dissolute kitten.

As they themselves admit, much of their repertoire consists of songs about love in its many forms. Their remarkable ability to switch mood from the acidic to the mordant recalls Noel Coward. Scathing numbers about the inadequacies of men or self deprecating ditties about the state of their own sex lives combine with plaintive, gentle melodies about love lost or never found. Their purely satirical songs are equally effective and new numbers include nods to Bill and Monica, genetically modified food, the Jerry Springer Show (…and this is on the level: I’m pregnant by the devil and Elvis lives next door) and (particularly hysterical) Fergie.

White’s Blues, their perennial tribute to middle class women who struggle to wear fur, eat meat and send their children to public schools while remaining oh-so-politically-correct, has been updated to the age of New Labour. Song for Tom is particularly clever and affecting. In past shows Dillie Keane has delivered blisteringly funny eleven o’clock numbers about women whose fear of being over 30 and single leads them into liaisons with the most inadequate of men. This time she sings of a woman unwilling to be hurt again who can barely admit that she "quite likes" the ordinary but decent bloke who has somehow stumbled into her life.

Longtime director Nica Burns has moved on to be replaced by Clarke Peters who has broadened the scope of the evening by presenting the first half as a kind of mock pre-show warm up with the girls seen backstage in jeans and hairpins. They emerge in the second half as their familiar glamorous selves, resplendent in gold, red and black bugle beaded sheaths. There is a little more dancing than before; the wit remains as sharp as ever. Peters has also freed Dillie from the piano for much of the night with the addition of musical director Sarah Travis at the keyboard. Travis also arranged the bulk of the numbers. The women navigate Keane’s complicated and delightful vocal arrangements with even more verve than usual and the entire evening is both deliciously entertaining and gently thought provoking.