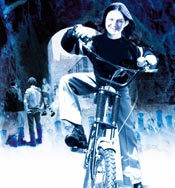 As his brother and nieces anxiously await the outcome of their Oscar nominations, Peter Sheridan sees the production of his new play under the &#145;new writing&#146; banner at the Peacock. Accompanied by a lavish program celebrating 100 years of the National Theatre, and thus bearing the double burden of being a showcase piece and an exemplar of contemporary Irish writing, the show is weighed down by its bracketing. In itself it is a modest and largely inconsequential nostalgia piece, a kind of watered-down cross between Paul Mercier (Studs, Down the Line) and Frank McCourt (Angela&#146;s Ashes). The play exhibits the class awareness and aesthetic &#145;outreach&#146; aspects of a Mercier Piece, but also has the air of distant reminiscence characteristic of McCourt. It lacks the grit of Mercier though, and avoids both the sentimental excess and prevailing gloom of McCourt. The result is not altogether unpleasant, but never escapes the additional labeling of &#145;youth theatre&#146; by virtue of relatively uncomplicated characters and a lack of real social or political penetration.

The action takes place on a grass mound by the Royal Canal at the North Wall, Dublin. Redser (Aaron Monaghan) is a fourteen year-old schoolboy from "the houses" whose best friend Pancho (Feidlim Cannon), one day younger but altogether more hard-bitten, is from "the flats" (apartments). In the course of a couple of days in the late 1960s, the friends face a number of potentially life-changing choices. Redser is in love with Pancho&#146;s slightly older (fifteen year-old) sister Catherine (Lisa Lambe), who has left school and is now working. Though he vaguely suspects he and Pancho were swapped at the hospital due to his affinity for Pancho&#146;s lifestyle over his own, he hopes to marry Catherine one day, if he can survive his schooling and their friendship. When Pancho&#146;s alcoholic father sells his long-term work permit and drinks the profits, Pancho sees no choice except to leave for England. Redser, his solemnly-sworn blood brother, must therefore also go, but obviously he doesn&#146;t want to. What might the consequences of such voluntary exile be for these young Irish men, and is there a chance of a miracle to save them?

It takes some time for the plot to unfold. Much of the play is concerned with expositional dialogue exchanges between the characters, including another school friend Joe Joe (Domhnall O&#146;Donoghue), who is terrified of two old ladies who live nearby (M�ire N� Ghr�inne and Anne Kent) and are thought of locally as "the North Wall witches." The first bit of sustained dramatic action takes place late in the play when it appears that the old ladies have been robbed and Redser comes across an old handbag full of money. The moral dilemma becomes one of choice and consequence as the "finders keepers" rule might mean salvation or damnation or both.

There are some nice details along the way here, but there is very little narrative urgency. The play ambles along the corridors of memory, pausing periodically to see the sights but never getting very far. Partly autobiographical, it is informed by a sense of a moment in time now long passed in the social history of working class Dublin. Though the issues are still with us, the stratification of Irish society has been complicated by the new ethnicities and a wholesale shift in world view accompanying major chances in the economic and cultural landscape.

The action of the play is rooted firmly in the distant past. While there is a universality in the drama, its sense of immediate consequence is muted. An older audience will recognize aspects of their own world; a younger one will presumably respond to the characters as they see them. But the play runs the risk of passing over the middleground. In itself it lacks real dramatic meat, and in terms of "new writing" there is nothing innovative or interesting about it, which is not to say that it is not perfectly well crafted.

The actors do quite well representing characters ten years their junior and thirty years remote from their own experience of childhood. The direction is simple and clean, befitting Martin Drury&#146;s experience in youth theatre and Sheridan&#146;s own film and theatre directing experience. The show is best suited to younger audiences and, on the night attended by this reviewer, the target demographic were in attendance and suitably appreciative, particularly of the scattered moments of partial male nudity and occasional profanity.