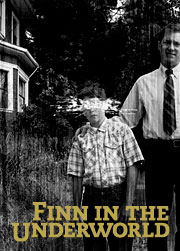 Twenty-five-year-old playwright Jordan Harrison was partially inspired to write his new play, Finn in the Underworld, by the movie The Haunting, based on Shirley Jackson&#146;s novel, The Haunting of Hill House. The discomfort he creates for the audience is not based, however, on B-grade horror- movie-style suspense, but, more cleverly, on the way he manipulates reality, bends expectations, plays with time and moves actors in and out of characters like ghosts.

Juxtaposing the secrets of one family&#146;s past with the discomforting realities of a sexually transgressive young man and his need to shock and risk, the narrative that results takes the audience on an unpredictable, claustrophobic journey into some pretty sordid realities. Sexual activities which may have been unthinkable onstage before the 60&#146;s may be fair game today, but aren&#146;t exactly enjoyable to watch. And while the audience becomes unsettled in the world Harrison presents, the people onstage don&#146;t seems particularly comfortable with themselves either. If it succeeds at all, Finn in the Underworld works as a sexual shock-fest, not a thriller.

It is not even the characters that matter, as much as the mood, the creepiness gone rampant at Grandma&#146;s house.

In the program notes, Harrison talks about how his tendency as a playwright, so far anyway, is to let a play "fall apart" in pursuit of its aesthetic goal. That is exactly what happens here, something only a very young playwright would be willing to risk. When one of the (still active) main characters is announced to be dead mid-way through the 90-minute work, reality begins to become less and less important. Eventually, the play transforms itself into a kind of narrative free-for-all with only the slightest connection to the original characters and story. It is unsettling, to be sure. Harrison creates a David Lynchian bad-dream-state that never lets go.

The cast includes some veterans doing what they do serviceably, with the exception of the kid, Finn, played by Clifton Guterman. Guterman&#146;s performance of the wild-child is spot-on. His pout-faced gay-boy persona is also the only character supplied with any depth; everyone else seems like a cardboard cutout. This play takes a stab at some squirmy issues, using ghost-story cliches to attempt a level of suspense that it never really earns. The set, it should be mentioned, closes in on the characters, scene by scene, until the space left is very claustrophobic indeed.