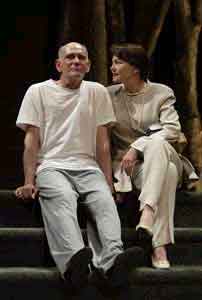 All happy families are happy in the same way, Tolstoy said. He might have added that writers keep dreaming up new ways for families to be unhappy in order to keep the formula fresh. One of the siblings must have romantic troubles, so here the son, Billy (Peter Gaitens). falls in love to the acute distress of his mother who first learns he is homosexual. One of the siblings should be worldly or knowing: so here the daughter, Zoe (Martha Plimpton), cornering the implications of both, haunts the East Village and contracts AIDS. She will die before her grandfather, her favorite family member, instead of afterward in the order nature intended. The end of the play repeats lines from the opening, so the boy holding the box of grandpa’s ashes confirms that historical continuity is at work, the "blood" line in the title.

The father, Constantine Stassos (John Sierros), is not your stereotypical flake relying for life support on a stalwart mother (Cherry Jones), according to the basic plan of family sagas still going strong in television sitcoms. Here he grieves like a cartoon mom with noisy excess when he believes his daughter is getting married&#150;Mediterranean men are a passionate lot. For that matter, he performs his every moment on stage at full throat to prove he’s an aggressive player in a tough new world. Mother turns regularly to her confidant Cassandra (Jeff Weiss), the drag queen, for sympathy and comfort in exchanges that breathe some life into scenes that otherwise might disappear without loss. Weiss tells it like it is, of course, that’s what his type of character does. The style doesn’t quite mesh with that of the lovely Ms. Jones, whose role gives her nothing to do.

Beyond this, what is happening to which of them and why over several generations from the 1930s to the present, any of that may be unknowable. In every scene, family members act out, saying, in so many words, they are dysfunctional, but for no discernible cause.

Flesh and Blood is not a play, but a three and one half hour long stretch of persons on stage without a plot to hang onto. They apparently dramatize the first part of a long, long novel about an invincible Greek immigrant, his equally indomitable Italian-American wife Mary, their beginnings in 1935, and their three children. Theirs is the American dream that failed before the 1930s even happened&#150;this much can be gleaned from the first minutes after curtain up.

The novel reads the future of the nuclear family as profoundly disturbed, including a single mother dying of AIDS, a gay couple, an illegitimate grandson, a drag-queen godmother and an adolescent suicide. Setting up any of these situations might have given some shape to the play’s dialogue, most of it, alas, as short on a subject as it is on language. So there are no ringing words to hang on to, either. Nor do characters shape the action. The young boy of the family comes closest to the idea of a central character making his way through the world being partially dramatized. Or more accurately, the business on stage illustrates bits of his story.

The production as a whole conveyed a sense of tiptoeing around theatrical gay cliches, like a guy vamping, or flailing a limp arm, or talking in falsetto, a sense of trying so hard not to say that it scanted the punch of drama and coherence as well. The playwright, Peter Gaitens, seemed to want to present the subject of homosexuality as a given, without the popular tags, whether humorous or just tasteless; so he instead attended assiduously to the surface, spelling out word after literal word, relentlessly, and crossing every "t" without looking up to notice that his project needed glue&#150;a topic or theme or quirky character or transcendental passion to connect episodes sprawling outward into the space of one hundred years.

Extreme literalness, for example, leads the mother not only to convey her disapproval of her son’s sexual choice, she finds occasion actually to say that gay guys "disgust" her. The girl with AIDS not only tells her plight, she rushes off stage retching, blurting out she is about to vomit and also announcing she "will die." That box of grandpa’s ashes at the end makes an audible noise to prove there really is life after death.

At the same time, director Doug Hughes clearly wanted to avoid stereotypes, so in the first act Grandpa is played by a man in his 40s (Sean Duggan); the hero of twelve by a guy who looks to be in his 30s (Peter Gaitens); the Mother by the charming Cherry Jones. The acting, for that matter, is uniformly fine. The fixed set of bare tree trunks surrounding a central room clearly forecasts a barren future, well before homosexual implications confirm the probability, while the boy notices three unrelated couples going at it sexually.

But does this configure passing generations (no pun), or the boy’s initiation, or some casual humping tossed in for the hell of it? Where, for heaven’s sake, is the motive force driving these three generations of people–say, the curse of Atreus, or War and Peace, or at least Life With Father? The thing of it is that Michael Cunningham, author of the novel, knows that plays don’t work like novels, whose differing parts may spread in differing directions more or less at once. The playwright with whom he collaborated on the script, Peter Gaitens, had equally as many reservations about cramming four hundred odd pages of family saga about dozens of people into a two hour play. Yet, although both anticipated the unwieldiness of such a project, Gaitens proceeded and found several strategies to help translate one form into another, including a Greek chorus and at one point overlapping voices as a way to match the rhythm of Cunningham’s prose.

Strategies, however, do not substitute for a compelling story and engaging characters. Flesh and Blood lacks both.