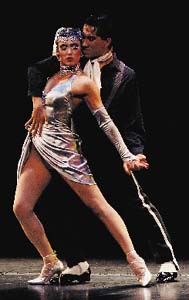 Tango: The Dance, the Song, the Story

Tango and the Political Economy of Passion

. Forever Tango, an evening of tango music and dance, played originally in San Francisco, where it had a highly successful run of nearly two years. The show then moved on to Broadway and toured the United States widely, as well as making appearances in London, Toronto, the Spoleto Festival, and throughout Japan.

Now San Franciscans who were not lucky enough to catch the show before get another opportunity, as the bandone�ns once again offer their distinctive dissonances, accompanying a troupe of talented dancers who display a diverse range of tango styles. With this show in town, Buenos Aires does not seem quite so far away.

The show’s first production number recalls the early home of tango in the brothels of Buenos Aires, the women appropriately attired for their trade, the men suited in gangster mode. All the elements underlying the catchy syncopations of the dance come into play. Steamy in its sexuality, legs entwine, eyes engage, hands caress necks, legs, backs. The complicated, tricky steps of the tango demand from the lead a movement of command, from his partner a response of alert and receptive obedience. The very form of the dance, then, incorporates roles of dominance and submission, reflecting both sexual and nonsexual aspects of relationships.

When conflict arises between two gangsters in this scene, they dance together, acting out their hostilities. In this context (unlike the male/male dance in Saura’s current film Tango) sex is not the subject, but dominance certainly is. The dance is choreographed aggression, transformed by art from violence into patterns of movement, line, rhythm. It also served as a reminder of the very beginnings of tango, when only men danced.

What follows is a series of dancing couples, interspersed with musical numbers for the orchestra, a song or two, and some ensemble dancing as well. Star billing is given to Miriam Larici and Cesar Coelho, two young performers with classical dance training. Their dances are athletically choreographed and slickly professional, with the appreciation of line and extension that only such training could produce. But somehow the overlay of classical technique seems to dilute the dramatic effectiveness of their numbers as tango, fine though their dancing may be. On opening night, too, they weren’t projecting very much in the way of personality. In that department the competition was tough.

Jorge Torres and Karina Piazza, also a young couple, danced with a smoothness and style that seemed similar to the Latin dancing on the international ballroom circuit. Charming and accomplished, but, somehow, missing the grit and sense of authenticity of the original.

The remaining dancers gave more of the impression that they had come by the route of the traditional tango of the clubs of Buenos Aires. And they demonstrate that tango is not a dance that requires youth or beauty or gym-worked bodies to be sensationally sexy, passionate, and artistic. Faces, bodies, and bearings revealing the maturity of character that comes only with the experience of years immeasurably enhance fine tango performance.

Carlos Gavito, a silver fox if ever there was one, has been dancing for over thirty years and dances masterfully – understated, yet stylish and intense. His younger partner, Marcel� Dur�n, is winsome and yielding. Together they generate a subtle, sexy heat on the stage, even as Dur�n takes a proffered red handkerchief from Gavito and polishes his shoe in a joy of submission.

Hector Mayoral is a big man, beyond stout. His footwork, on the other hand, is astoundingly light – quick, nimble, and precise. His partner, Elsa Mar�a, is able to capitalize on Hector’s gut in an amusing bit of choreography in which she leans her chest up against him and extends her body out in a concave line, supported by the sheer bulk (and superb balance) provided by Mayoral. Artistically risky, it works nonetheless.

Still another couple, Luis Castro and Claudia Mendoza, bring some genuine humor to the mix, with a bit of exaggeration here, a bit of satire there, accomplished dancers able to laugh at themselves and their art without compromising either.

The eleven piece band that plays throughout affords opportunities for the display of some virtuoso musicianship on the piano, the violin, and the bandone�n. One can’t help but to wonder if, in a smallish house like the Theater on the Square, unamplified sound might be preferable, but that, alas, seems not to be the way of the theatrical music world these days. Too, the first half of the show would perhaps be better balanced with a little less of the music served up without accompanying dance.

But not to quibble. This is a fine evening’s entertainment and a wonderful way to immerse oneself into a different culture through its popular musical and dance expression.