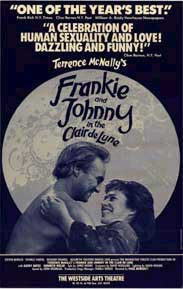 The fledgling Broadway season, having gotten under way with a solid revival of I’m Not Rappaport, follows with another two-character actors’ vehicle from the 1980s, Frankie & Johnny in the Claire de Lune. An intimate, bittersweet, romantic play about the forging of a relationship between two middle-aged losers in love, Frankie and Johnny was originally produced Off-Broadway by the Manhattan Theatre Club in 1987 with considerable success, winning kudos for its leading actors Kathy Bates and Kenneth Welsh. This excellent pair unfortunately were not cast in the film version which saw fit to recast the ordinary, frayed, not too attractive, over-the-hill couple with the hardly dowdy Al Pacino and Michelle Pfeiffer.

This time around more felicitous production choices have been made. The current cast– Edie Falco and Stanley Tucci–are fully convincing in their non-glamorous roles and offer compelling performances that draw the audience right into the play. Initial fears that the play’s intimacy would be compromised by the grander venue of a Broadway theater prove ungrounded.

The plot is simple and familiar. Will the pair take a chance on love? The catalyst is Frankie, a shop-worn waitress who has brought Johnny home to her dingy Manhattan flat for a one-night stand. Johnny is the short-order cook in the greasy spoon restaurant where Frankie works. McNally opens the play with the sounds in the dark of their energetic love-making. Having gotten the sex out of the way at the outset, the playwright can focus on the sometimes by-product of lust: love.

Having satisfied her sensual appetite, the often-burned Frankie considers the episode over and done with and asks Johnny to leave. He, on the contrary, has fallen hard and wants more, much more. A born romantic, an autodidact who loves to quote Shakespeare, he is no shrinking violet; he is not ready to go home–ever. The pragmatic, no-nonsense Frankie wonders what she has gotten herself into. Has she brought home a maniac? A stalker? But beneath Johnny’s aggressiveness there is a child-like lovability to which Frankie is attracted. No matter how spirited his verbal pirouettes, he always lands on his feet, sometimes very heavily. It’s a fine line between attractive energy and bullying, but his desire for true emotional contact reveals a vulnerability that is irresistible.

There is a clear and present danger of sentimentality here and McNally skates at times on very thin ice. If Johnny went home and they had other dates would it be impossible for a relationship to grow gradually over time? Perhaps in reality but not according to Johnny and to this play. It’s now or never. If the moment isn’t seized all chances for happiness will evaporate. This long post-coital night is indeed some enchanted evening: "Run to her side and make her your own / Or all through your life you may walk all alone." McNally succeeds in making this credible. Life is short, Frankie and Johnny have used up most of their chances, and we fervently want them to connect. McNally is even willing to risk the unabashed romanticism of mood music to enhance his theme. Johnny has, with typical brashness, phoned a classical music disc jockey and requested "the most beautiful music in the world." The D.J.responds with Debussy’s evocative tone poem dedicated especially for lovers Frankie and Johnny whom he assumes are using pseudonyms.

None of this would work if the audience did not believe in and identify with the characters. Falco and Tucci seize the opportunities McNally has afforded them. Guided by Joe Mantello’s subtle direction, the pair create contrasting physical presences. Tucci is a prize fighter, always on the balls of his feet, thrusting and parrying in every direction in order to score points with his desired prey. Falco is rooted, slyly evasive, with a wide ironic stare, her hands nervously in motion. The pair’s timing is impeccable as they create a rhythmic rapport that is continually engaging.

At play’s end the dance subsides. Frankie, still unsure as she sits on the bed clasping her knees, decides to brush her teeth. The hyperkinetic Johnny sits down next to her, mimicking her posture. He too decides to brush his teeth and the curtain falls on their duplicated act of domesticity. Everything hasn’t been settled to Frankie’s satisfaction, but she seems ready to take another chance. It’s an earned happy ending for which the spectator is most grateful.