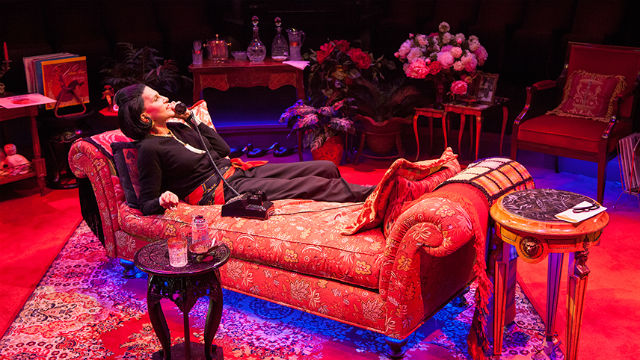 There’s an amazing scene in the movie “The Devil Wear’s Prada” where Miranda Priestly (Meryl Streep) dresses down Andy Sachs (Anne Hathaway) for belittling fashion. “You’re wearing a sweater that was selected for you by the people in this room from a pile of stuff,” she concludes. The speech perfectly illuminates Priestley’s identity: She lives fashion.

Diana Vreeland lived fashion, too. She reinvented it. But unfortunately, we don’t get any such insights in “Full Gallop,” the one woman show featuring Mercedes Ruehl as the legendary Vogue editor-in-chief. This is doubly irksome because everything else about the show works. Ruehl is brilliant as the uncontainable Vreeland. She frenetically wanders the stage, dances, sings, flits from one anecdote to another without taking a breath – what you’d expect from Vreeland. She is opinionated, spirited, saucy and, at times, hilarious.

But context is important and, in this case, the context is Vreeland being fired from Vogue. We encounter her the day after returning from a four-month European escape – excited by her exploits but quietly seething over her dismissal and seemingly unconcerned by her tenuous finances.

While the script gives great detail about Vreeland’s life: mother, husband, friends, travel, favorite colors (red but not salmon pink), it only skirts around her professional life. She’s offered a job and six months later she’s editor – it’s more an aside than a full-blown story. She looked at lots of pictures. She liked to put Cyd Charisse’s legs on other people. Vogue doesn’t know how to fire people. We get Reese’s Pieces when we need a Toblerone.

I get it. Vreeland wants to talk about anything but the end of her professional life. Getting fired is a humiliating experience, and anyone would want to cover that up. But at some point the real emotions need to poke through. Professional accomplishment is the very core of the Diana Vreeland legend. How did she do it? Who did she fight? What did victory taste like? Anything.

If I seem infuriated, it’s because the play is so close. The set is glorious – so much red it hurts your eyes. The direction is spot-on and Ruehl’s performance is a thing of beauty. There’s just no emotional core. And without that, all we really have is superficial surfaces, kind of like Andy Sachs’ vision of fashion.