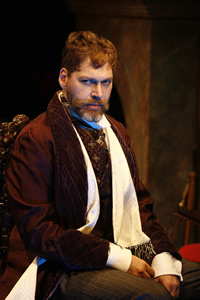 Perhaps there is a theatre-goer somewhere for whom Lear’s fate comes as a surprise or who thinks Hamlet and Ophelia, or Romeo and Juliet, will get married and live happily ever after. This benighted ticket buyer would make the perfect audience for Patrick Hamilton’s entertaining chestnut Gaslight, AKA Angel Street.

For the rest of us the suspension of disbelief comes in very handy. We all know the gist of the play (made into a famous movie starring Ingrid Bergman), we know the clever gimmick involving the gaslights going dimmer and then brighter, and we know that the story’s terrorized heroine comes out on top at the end. We know, too, how the title of the play has come into our language.

So, unless we’re in a very snarky mood, we put all that knowledge aside, and we sit back to enjoy the play’s whip-snapping plot twists, Victorian ambience, and melodramatic plot. The Irish Repertory Theatre’s production invites us—and makes it easy for us—to do just that.

Director Charlotte Moore moves the plot forward at a sprightly pace, fast enough that the big-enough-for-a-Hummer holes in the plot are mere bumps in the road, and smallish ones at that. Brian Murray, everybody’s favorite New York actor, is perfect as Rough, the aging police detective itching to solve one last mystery, the years-ago murder of Lady Barlow, whose famous rubies were never found, by her killer or by the authorities. In his appealing and avuncular style he also wants to save a damsel in distress. Murray is a brilliant comic actor and the comedic flavor he brings to his character is delicious. In lesser hands Rough could seem a bit of a bore.

As the damsel that Rough is out to save Laura Odeh does a sprightly, weepy-eyed dance right up to the line of too much, but somehow manages to make the character of the slowly-being-driven-mad young wife more or less believable and very appealing. Her husband the villain is played by David Staller; he doesn’t twirl his mustache in hoary villain style, but he does fluff up his beard every so often. As a mad and monomaniacal dandy he too reins his performance in just this side of “curses, foiled again” melodrama.

As Elizabeth and Nancy, the two maids of the house, Patricia O’Connell and Laoisa Sexten are excellent. So sexy, appealing, and funny is Sexten that I was disappointed when her brief scenes flew by all too quickly. The only truly jarring moment in the evening came when two Keystone Cops style policemen appear at the end to drag the villainous husband off to justice. They are jarringly out of style, in ill-fitting costumes, unconvincing makeup, and they don’t seem able, even when we’ve utterly surrendered to the play, to arrest a jaywalker.

But I quibble. The set (James Morgan) is overstuffed, and completely convincing as the stifling place where this story could unfold; the lighting (Brian Nason) is just fine. Costumes (Martha Hally) are period-perfect and perfectly support the story.