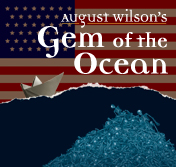 For fans of August Wilson, Gem of the Ocean is a not to be missed event. Beautifully staged with set by David Gallo and direction by Marion McClinton, Gem of the Ocean, unfortunately misses for much of the remainder of the audience.

Wilson has set himself the task of illustrating the 20th century Black American experience through a cycle of ten plays, each one set in a different decade. Though Gem takes place in 1904 and represents the first decade, it is almost the last to be written and produced. Previous offerings in this cycle have garnered and deserved multiple rewards: Pulitzers for Fences, and The Piano Lesson; a Tony for Fences; New York Drama Critics Circle Awards for Ma Rainey&#146;s Black Bottom, Joe Turner&#146;s Come and Gone, Two Trains Running, Seven Guitars and Jitney. Gem shares the affection for and frustration of Blacks trying to make it in a post-Civil War America which has proven to be as bigoted and in some sense almost as repressive as in the days of slavery.

The action takes place in Aunt Ester&#146;s gracious Pittsburgh home. Ester is a Methuselah like character. Though she is supposed to be 285 years old and the soothsayer and spiritual advisor to her people, little is done to develop this mythological reference. She appears to be a crusty 75 or 80 year old who was sold into slavery at age 12. Very much in the here and now, she treasures that bill of sale (formed into a paper boat) as a talisman for educating younger Blacks in their history and to give them strength to fight the necessary fight. Phylicia Rashad convincingly transforms herself into an old woman flashing Ester&#146;s strength, bossiness and grasp of history along with age. Withered though she is, she flirts with Solly Two Kings (Anthony Chisholm), another oldster who is still risking his well-being fighting Jim Crow.

The naivete of young blacks who did not directly experience slavery is embodied in Citizen Barlow, (John Earl Jelks). Using her paper boat, Ester inducts him into the City of Bones, an image Wilson has used in previous plays to portray the strength of and ultimate peace for Blacks. Other than making the point that one is affected by his history whether or not he knows that history, Citizen&#146;s role is an awkward dramatic device and the mystical scene in which Ester inducts him fits poorly with the gritty, down to earth language of the rest the play.

Similarly Wilson fails to develop the relationship between Ester and the cook and butler who are ever present on set. More than just a cook, Black Mary (Yvette Ganier), is as crusty as Ester but less warm and approachable. The butler, Eli (Al White), is a dignified but nonetheless militant older gentleman. Unfortunately, as written, Eli serves no real dramatic purpose. And Wilson never explains Ester’s apparent affluence.

There is action off stage, characters rush in, men are falsely accused, fires are set, people are killed. Yet somehow the entire impression is static. The fault seems to lie in the writing, not in the production. At the risk of being politically incorrect, this is a play that will appeal to many blacks in much the way that drama referencing the Holocaust appeals to many Jews. The history and sentiments are accurate. America has been outrageous in denying blacks equal opportunity and Wilson connects that history to the frustrations of Blacks trying to make it in a society still beating them down. While the agony and frustration are palpable, the play on stage needs further work to make it dramatically effective.