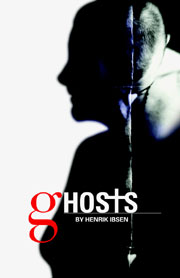 Henrik Ibsen&#146;s Ghosts is the kind of play that will haunt you long after the curtain comes down. It can get a little spooky but there is nothing supernatural about this tale of dysfunctional families in 19th century Scandinavia. The title, in Norwegian, actually translates to &#147;something that walks again.&#148; In this case, that something is the &#147;sin&#148; of a dissolute father that returns, long after his death, to cast a shadow on the lives of his wife, his children&#150;both legitimate and not&#150;and his dearest friend.

Ghosts also is another glove flung across the face of the conventional, often-hypocritical, morality of the times, a restrictive social structure that sent Ibsen into self-imposed exile for some 27 years. You could think of it as the flip side of A Doll&#146;s House: what might have happened if Nora had not walked out the door and slammed it behind her.

Mrs. Alving (Ellen McLaughlin in a highly charged performance) doesn&#146;t leave, even after the evidence of her husband&#146;s blatant infidelities shatters her world. It&#146;s not because she loves him, but because the local pastor, also a close family friend, exhorts her to &#147;do her duty.&#148; That Mrs. Alving has a thing for the upright, uptight clergyman only flavors the stew.

The cast of characters is rounded out by Regina, a feisty young housemaid in the Alving household (Emily Ackerman), and her father, Jakob (Brian Keith Russell), a lying, manipulative scoundrel in sheep&#146;s clothing who manages to pull the wool over the pastor&#146;s eyes time and again. When the Alving son (Davis Duffield) makes a rare visit home for the dedication of a memorial to his father, the skeletons begin to creep out of the closet.

Young Osvald was sent away for schooling at the age of seven by his adoring mother who wanted to keep him innocent of his philandering father&#146;s shortcomings. Now a respected up-and-coming artist in Paris, he has lately been ill, unable to work. Doctors have diagnosed syphilis, which is devouring his brain. He blames himself but in truth, the disease&#150;a scourge of the 19th and 20th centuries much on a par with AIDS in our own times with regard to stereotyping and social stigma&#150;is his true inheritance from his hardly-known father.

Add to this a hint of incest and it quickly becomes apparent that Ghosts is a play about sex, written in an age when sex was not discussed in polite circles. Ibsen is known as a &#147;feminist&#148; writer and, indeed, both Mrs. Alving and Regina are examples of his strong women. But, in this play, he takes on more than the prevailing attitudes toward the weaker sex. It is the hypocrisy, the fabric of lies that often holds families together&#150;until they begin to unravel&#150;that make Ghosts still relevant in a time when sex occurs nightly on our television screens and untruths are commonplace both in the corporate boardroom and the halls of government.