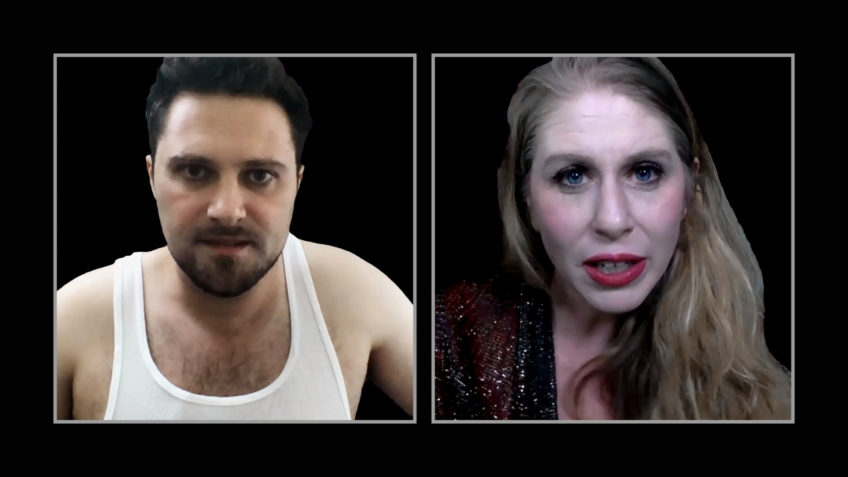 This remarkable English language presentation of the 1906 Yiddish play, “God of Vengeance” (“Got Fun Nekome”)was written by Sholem Asch (1880–1957), the prolific and popular Polish-born fiction writer. Returning after a successful short run in March 2021, the Yiddish Theatre Ensemble‘s production of “God of Vengeance” is rife with 21st-century themes, including freedom of expression, respect of sex workers, domestic violence, and acceptance of LGBTQ relationships.

This lively streaming 100-minute video production has been re-set in New York’s Lower East Side during the Depression with first-rate digital set designs and costumes to match. “God of Vengeance” is the story of an apparently religious Jewish couple, husband Yankl (Roni Alperin) and wife Soreh (Jill Eickmann), who try to protect their marriageable daughter Rivkeleh (Elena Faverio) from the couple’s brothel business located in the basement of their building. Yankl has commissioned a unique and expensive hand-written Torah scroll for his daughter, which he believes will protect her and keep her kosher.

But Rivkeleh has other ideas. She has fallen in love with one of her father’s prostitutes, Mankeh (Zissel Piazza). Soon tensions mount as life in the family’s apartment and the brothel intertwine.

When Yankl’s plans for his precious daughter are endangered, he begins to break down.

Bruce Bierman’s excellent direction of “God of Vengeance”retains a bit of the distinct style of the old Yiddish theater — a slightly exaggerated emotive method that milks the most out of the actors’ lines. The cast of 17 proficient actors, many non-Yiddish speakers, come from around the country. The use of split screens artfully spliced together was used to keep the actors safe from contagion instead of the live Berkeley production, which had been planned initially.

The well-written adaptation by Caraid O’Brien, based on the English translation (but including some Yiddish language and idioms), stays close to the original script while adding some new interpretations of plot and character development.

If only my Yiddish-speaking grandparents were alive to enjoy today’s renaissance of Yiddish language and culture. This High-German-derived language infused with Hebrew and Aramaic, historically spoken by Ashkenazi Jews, originated during the 9th century in Central Europe. Spoken by 11 million Jews before World War II, Yiddish is currently the first language of fewer than two million people, mostly very religious (Hasidic) Jews. Yet, Yiddish is now taught in many colleges in the United States and Poland, among others, while old books written in Yiddish are collected and preserved in central repositories.

All of us know some Yiddish: chutzpah (audacity), nosh (snack), chotchke (trinket), shlep (drag or pull), and bupkis (nothing), are a few common examples. It is fun to see and hear the actors throw in their Yiddish expressions with the correct emphasis, pronunciation, and shrug of the shoulder.