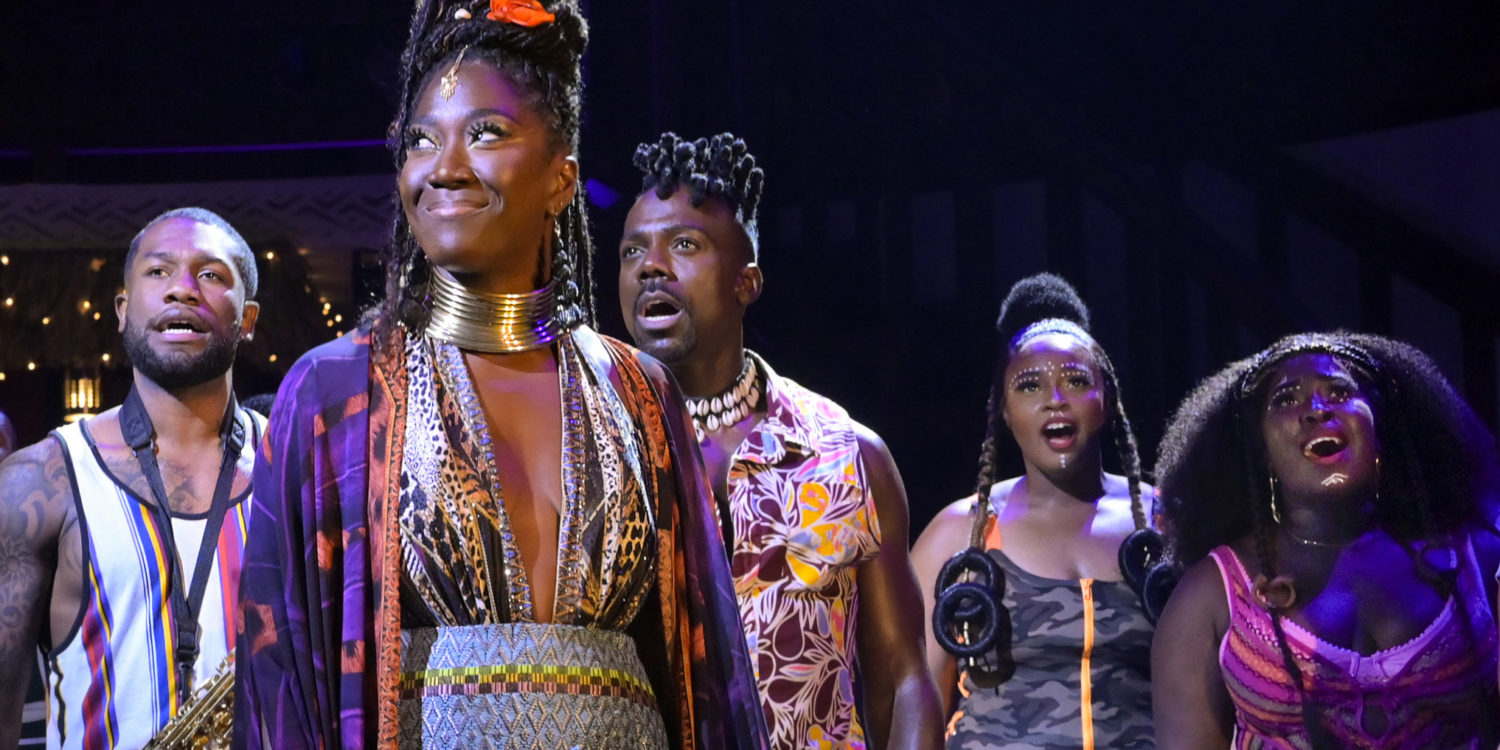 In this joyful, romantic tale highlighted by magnificent music, singing, dancing, and comedy, young politico Omari falls for the goddess of music at the Moto Moto, a hot and cool Afro-jazz club in Mombasa, Kenya.

It’s rare that a world premiere production opens fully formed, ready to delight. Yet “Goddess,” a uniquely entertaining creation of musical magic and dancing dynamics, easily hits its stride opening night at Berkeley Rep as though it were in its mid-Broadway run. And, to a certain extent, that’s understandable because, after about ten years of workshops, “Goddess’s” original opening at the Rep last year was then postponed because of COVID.

In the Kenyan myth on which “Goddess” is based, Marimba, the gorgeous, gifted goddess of music, is cursed by her jealous mother so that she may never find love. In our story, Marimba comes down to earth looking for love and lands at the Moto Moto, the best little Afro-jazz club in Mombasa.

Hiding her identity under the persona of chanteuse Nadira (fabulous-voiced Amber Iman), she meets Omari (Johnson Richardson), scion of a political family, newly returned from Columbia University (the alma mater of book writer Jocelyn Bioh ’08 and director/show conceiver, Saheem Ali ’07). When Omari accompanies Nadira’s sultry singing with his saxophone, we can see the sparks of love fly.

But what about Omari’s fiancée, the impatiently waiting, adorable-looking, but hard-charging Cheche (Destinee Rea), who wants to run his campaign for mayor of Mombasa? And Omari’s father, Hassan (Kingsley Leggs), and mother, Siti (Kecia Lewis), both heavily invested in his following the family’s political tradition, remind Omari that he didn’t earn his privileges by himself. Yes, it’s not an original plot line, but it works here, without skipping a beat.

The comically endearing secondary plot between club workers Ahmed (Rodrick Covington) and Rashida (Abena) is raised well above the ordinary by the tremendous talent of these actors.

But the focus of “Goddess” is the outstanding music and dance. It’s hard to know who to praise first: Michael Thurber’s sensational African, Jazz, and R&B music and lyrics (additional material by Mkhululi Z. Mabija), choreographer Darrell Grand Moultrie’s fusion of hip hop, modern, African, and street dance, or the troupe of singers and dancers who make the music and dance come alive, especially the singing trio of Awa Sal Secka, Teshomech, and Melessie Clark. And “Goddess” would not have the same appeal without the sophisticated, creative set design by Arnulfo Maldonado and the dazzlingly colorful costumes by Dede Ayite.

“Goddess” succeeds in delighting its audience by combining a mythic story with a modern African twist, accompanied by superb music, singing, and dance. Don’t wait too long to get tickets.

“Goddess” plays at Berkeley Rep’s Roda Theatre, 2025 Addison Street, Berkeley through September 25, 2022. It’s 160 minutes long, with one intermission. Proof of vaccination and mask-wearing is required. Tickets $30-$138, subject to change, can be purchased online at www.berkeleyrep.org or by phone at 510 647-2949.