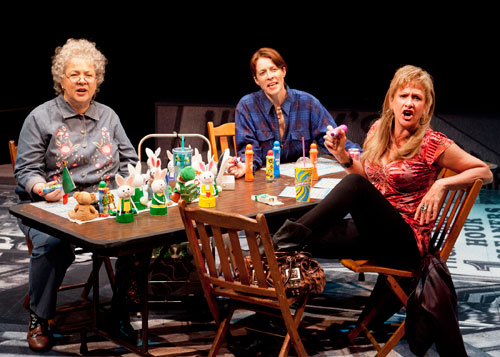 Is success in life a matter of luck or of choices? It’s an overarching question at the heart of “Good People,” receiving its San Diego premiere at The Old Globe.

The Tony-winning play by David Lindsay-Abaire (Pulitzer Prize winner for “Rabbit Hole”) tells the story of single mom Margaret who everyone calls Margie (Eva Kaminsky), a hard-luck “Southie” from blue-collar South Boston. We meet Margie as she’s being fired from her cashier job at a dollar store due to excessive tardiness, the result of unreliable day care for her disabled daughter. A string of lost jobs has preceded this one. Kaminsky gives a compelling performance about a complicated individual who, at times, you want to put your arms around; at other times you want to keep firmly at arm’s length.

Store manager Stevie (James McMenamin) has known Margie his entire life; a fact she tries to leverage by reminiscing about his late mother in a desperate attempt to change the outcome of the discussion. Stevie is obviously pained by having to fire a friend, but economic times being what they are he needs to do his job in order to keep his job.

No longer able to support herself and her daughter, logic dictates Margie spend the evening in the church bingo hall hoping to win rent money. Commiserating with Margie are her landlady and unreliable sitter Dottie (played to the hilt by Robin Pearson Rose) and hard-as-nails girlfriend Jean (Carol Halstead, who has an uproarious good time with the role). All three women play off of one another with dialog that is raw, insightful, and (“Pardon my French!”) profane. And all with superb comedic timing that would have made Lucille Ball and Vivian Vance jealous. Bravo, director Paul Mullins.

Accessing her nonexistent options, Margie seeks out Mike (R. Ward Duffy), a long-ago boyfriend who made good by leaving the old neighborhood to become a doctor. Perhaps it was opening-night jitters, but awkward small talk about the old days (they haven’t seen one another in decades) is made all the more so by a few stumbled (and possibly missed) lines.

Without finesse, Margie presses Mike for any kind of work, but he is unable or perhaps unwilling to extend a helping hand. Her pride hurt, Margie hits below the belt calling Mike “lace-curtain Irish,” implying he’s forgotten his roots and those who helped him along the way. The bullying works. In an attempt to reclaim his “good people” image of himself, he invites her to a swank party at his house where Margie can try her luck job prospecting among the well-heeled guests.

Buoyed by optimism, it’s back to bingo chasing a small jackpot for a Goodwill party outfit. But Margie’s bubble is soon burst when Mike calls saying his daughter is ill and the party canceled. Margie senses a brush-off and, in high dudgeon, embarks on a lengthy public transportation ride to tony Chestnut Hill only to find Mike and his African-American wife, Kate (Nedra McClyde), home alone tending their sick child.

Educated, mannered, and immaculately-groomed Kate extends hospitality, eager to hear all about a past her husband seems reluctant to divulge. What she gets in return is way too much information from motor-mouth, chip-on-her-shoulder Margie about Mike’s Southie roots, a violent racial incident, and their time together as a teenage couple. Unexpectedly stripped of his upscale veneer, Mike grows vocal and coarse. But Duffy’s performance merely loosens a tightly wedged cork; it never fully pops out of the bottle to hit you in the eye.

What does score is Michael Schweikardt’s scenic design: A collage of oversized liquor store, dry cleaners, and variety store signage images in that blue-tint haze that color takes on late at night. Covering the walls and floor of the stage, it’s a constant reminder that the neighborhood permeates and defines its residents. Even in Mike and Kate’s tastefully rendered living room, South Boston remains ever present under the area rug, just waiting to be revealed.