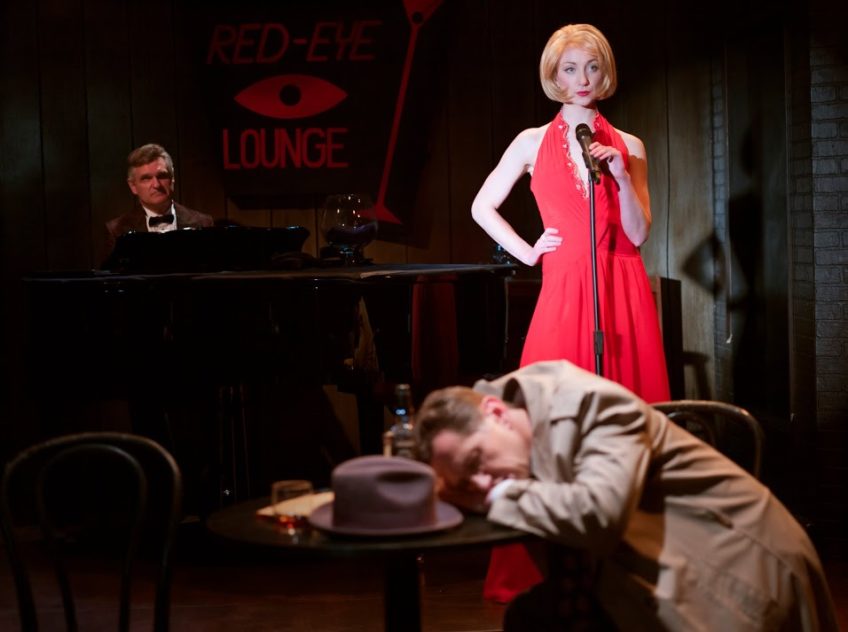 Music and Lyrics by Craig Bohmler and Marion Adler

Welcome to the Red Eye Lounge, where the lights are low, booze bottles near empty and a woman with a past is about to meet a man with no future in the satisfying musical “Gunmetal Blues,” onstage at the North Coast Rep.

A take-off on 1940s film noir, the story begins with a private eye in a trench coat (Kevin Bailey), a good-looking blond (Sharon Rietkerk) and a jaded piano player (Jeffrey Rockwell), who quickly sets into motion an intriguing, complicated plot involving murder, the disappearance of a wealthy heiress and more blonds. Moving the action briskly along is a toe-tapping musical score.

Under director Andrew Barnicle, the three-person cast work like a well-oiled machine. Bailey’s gumshoe has the rumpled, world-weary look of someone who knows how to roll with the punches, one of which literally lands squarely on his jaw. He nonchalantly spits a tooth across the stage as if it were the hull of a sunflower seed.

Rietkerk plays a mysterious dame, a bag lady, an ingénue and a nightclub singer delivering songs in an enviable soprano voice. She also has the audience in stitches as tipsy torch singer Carol Indigo, who sways on her high heels and comes dangerously close to sliding off the top of the baby grand while belting out a ballad. Rockwell, as piano player Buddy Toupée, is a less accomplished singer but delivers a truckload of laughs as the story’s narrator and in additional roles as a dim-witted doorman, a bull of an Irish cop and a menacing mobster.

On opening night, the pressure was on, with “Gunmetal Blues” playwright Scott Wentworth, composer Craig Bohmler and lyricist Marion Adler in the audience. The cast did itself proud.

With all the elements in place, audience members feel seated at a nearby cocktail table eavesdropping on a conversation that could easily land them in trouble. A running joke in the story about a suspect $20 bill motivated me to examine the currency in my wallet by holding it up to the light.