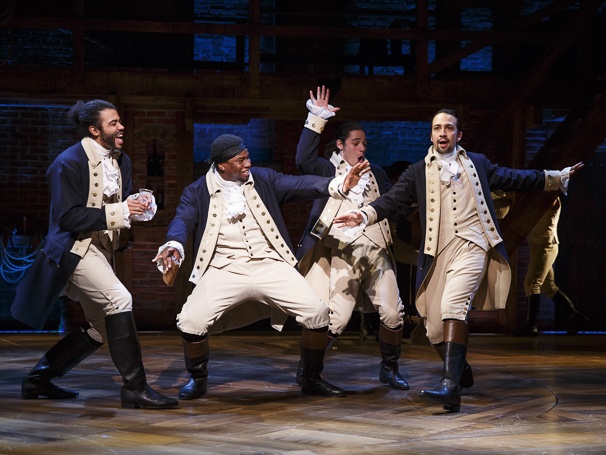 When a Broadway show gets uniformly rave reviews, I worry that the performance can’t possibly live up to the hype. Not so with “Hamilton.” What makes “Hamilton” unforgettable, in addition to its creative concept by the mega-talented Lin-Manuel Miranda (“In the Heights”), brilliant hip-hop music, inventive lyrics, energetic acting, rhythmic dancing and outstanding direction (Thomas Kail), is its portrayal of the founding fathers as dynamic hot-tempered young men, sometimes at odds with each other, but together risking their lives for a cause.

Most important to the success of this original and ingenious play, is the rags-to-riches story of Alexander Hamilton himself. Inspired by Ron Chernow’s award-winning biography of Hamilton that Miranda picked up to read on vacation, Miranda saw an exciting story of a boy who came up from the streets, made it big and died a dramatic death — more like a gangsta-rap movie than “1776.”

In the play, Hamilton introduces himself: “Hey, yo, I’m just like my country / I’m young, scrappy and hungry / And I’m not throwing away my shot…”

Hamilton was born out of wedlock to a woman of part French Huguenot descent, and James A. Hamilton, the fourth son of a Scottish laird. Having been abandoned by his father, he was raised in St. Croix and orphaned by his mother’s death when he was about thirteen years old. Hamilton found his way to New York City, where he attended Kings College (now Columbia University), became a lawyer, married into a rich Dutch family, authored most of the Federalist Papers, served as George Washington’s senior aide during the Revolutionary War and became our first Treasury Secretary, among many other honors and accomplishments. And of course, his life ended prematurely in a duel with his lifelong rival, Aaron Burr.

Like Antonio Salieri in “Amadeus,” Aaron Burr (wonderfully acted by Leslie Odom Jr.) has almost as large a role in “Hamilton” as does its star. From their initial meeting early in the first act, we see the two in conflict. Hamilton, a hungry firebrand, is veering towards self-destruction, whereas Burr is rich, calculating and risk averse. It was Burr’s unwillingness to commit himself early to the revolution that caused Hamilton to see Burr as unprincipled.

And so, in 1801, Hamilton helped defeat Burr when Burr and Jefferson were tied in the Electoral College for the presidency. Not that Hamilton agreed with Jefferson’s principles, but at least Jefferson had some. Hamilton also spoke against Burr when Burr ran for governor of New York the following year, ultimately leading to their 1804 duel.

At the performance I attended, that heart-sinking small piece of white paper placed loosely in the playbill announced a cast change. Hamilton was played, not by its author and star, Lin-Manuel Miranda, but by Javier Muñoz.  Muñoz acted and sang wonderfully well, however, leaving me and the rest of the audience extremely impressed and satisfied with his performance.  Muñoz also starred when President Obama saw “Hamilton” this summer.

The rest of the cast was equally strong, especially the beautifully voiced Phillipa Soo, as Eliza Schuyler, Hamilton’s wife, Christopher Jackson as the beloved George Washington, Jonathan Groff as an adorable, foppish King George III, rapper Daveed Diggs as Marquis de Lafayette in the first act and a teenaged, goofy Thomas Jefferson in the second act. After intermission, it took me a few moments to figure out that Diggs was playing a different role than he had in the first act.

While the music contains ballads and “show tunes,” the use of hip-hop in “Hamilton” is brilliant. The pounding rhythms give the production energy, while the rhymes make the lyrics easy to understand. It’s the 21st century iambic pentameter. In our typical view of Hamilton from his ubiquitous picture on the $10 bill, he appears old and dour, static and passive, the complete opposite of the man Miranda powerfully presents in language every audience member can relate to:

Every detail of the production adds to Miranda’s vision. David Korin’s set, a wooden scaffold, exposed brick walls with iron and ropes, invoke shipyards and sea trade at New York City’s port. There is no curtain, no set changes; but it all works. The costumes by Paul Tazewell are of the period, knee britches and velvet coats, but no wigs. The fantastic dancers are excellently choreographed by Andy Blankenbuehler. They wear costumes resembling beige long underwear, so there is high contrast between the dancers and the actors/singers. Most of the actors are people of color, which very naturally and appropriately fits the immigrant story being told.

A fabulous theatrical experience like “Hamilton” comes very rarely. So get your tickets now. They’re worth whatever you have to pay for them.