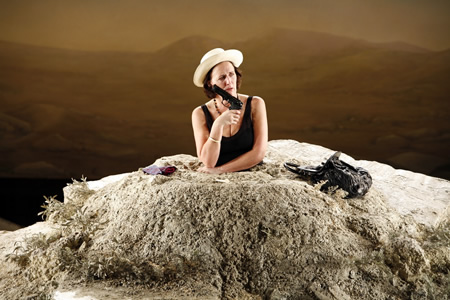 Written and Performed by Iris Bahr.

About the show at the 47th Street Theater, Dai, it’s never clear why Iris Bahr, the playwright and performer, chose the Italian word for her title. "Dai" means, "enough, or watch out, or you’ve hit the limit." Sort of. It does not apply to her as a cautionary remark at this stage of her career, when she’s successfully written and performed shows for television, film, and the stage, all of them extrovert, argumentative, on the attack. Her experience ranging from roles in "Curb Your Enthusiasm" to responsible writer of a well received book, "Dork Whore", a journey that is "exotic, unique, singular, personal, intimate, honest, exciting, wild funny smart and strangely arousing." (Larry Charles, director of Borat, Seinfeld, and Curb Your Enthusiasm)

In Dai her subject is Israel. In a café there, she takes on the roles of a variety of native women each of whom speaks her piece until she explodes, literally, one at a time, consecutively, each the victim of successive falling bombs. The format is more than a clever means to end one impersonation and take up another since Israel in fact is a dangerous "non-place," as she points out. The country owes its identity, indeed its life, to the U.S. That’s perhaps part of the sense of "dai": beware of Americans bearing gifts. Her inventive complaint, rapped out at near machine gun speed, wants to right the wrong images of Israeli people and politics. She delivers facts, sometimes lists of them, to overturn pernicious ideas whose currency promises more than mere antagonism between Israelites and Arabs in surrounding states.

Ms. Bahr’s performance is best at the wry humor she brings to serious, even terrifying, themes. Playing the victim she learned to be when she came to Israel at the at of twelve lies at the core of her self dramatization. Victims are deeply comic personae and Ms. Bahr taps into that aspect of herself with hilarious and moving result.

A surprise hit of the season thus far is Samuel Beckett’s "Happy Days" (1956), performed brilliantly by Fiona Shaw (Winnie). In a departure from practice, Beckett wrote this play in English and thereafter translated it into French; whereas he usually wrote in French first. It followed that the play premiered in New York’s Cherry Lane Theatre (1960) directed by Alan Schneider.

Sinking up to your waist in mud hardly can be called a neutral action, but that is what has already happened by the opening of Act One. In Act Two, Winnie has sunk up to her neck. The immediate consequence will be the end of her; so why is Winnie so cheerful? She has been taught since girl hood not to make fuss? More to the issue is the element of futility; we gather that no amount of effort can dig her out of the mound. Surely then, her ‘stiff upper lip’ carries a civil response too far. Beckett explained the play:

"I thought the most dreadful thing to happen to anybody would be not to be allowed to sleep, so that just as you’re dropping off there’d be a ‘Dong’ and you’d have to keep awake; you’re sinking into the ground alive and its full of ants and the sun is shining endlessly…"

The order of information in this speech is interesting: first the sleeplessness, then the fact of sinking, neither action alterable. Winnie’s good cheer remains indomitable, and ultimately chilling.

Beckett’s search for the meaning of life in its extreme circumstances remains as urgent in "Happy Days" as it was in his "Waiting for Godot" and just as elusive. There are no answers. Instead there is time. The set at the beginning of Godot, of an unnamed road at twilight, is the same as the set at the ending; all questions are left inconclusive; the fate of the two tramps remains unknowable. There is, however, a sign of hope that their plight may be recognized and amended possibly by the tantalizing Godot. He or she may be responsible for the slight change in the universe between Acts One and Two, for a small bare tree nearby sends out a leaf, brings it forth, gives it birth, the only event during the duration of the play, which we take to be endless. But Godot, of course, never comes. The tramps’ condition like place and time is irrevocably existential.

Beckett teases his characters with minuscule omens and contradictory signals that inspire a flicker of hope in a situation otherwise hopeless. It may be that attention to the merest change on the grand desert of existence that he visualizes amounts to all there is. In "Happy Days," an occasional grunt from Winnie’s husband Willie, situated on a patch of earth invisible to her mound, that grunt signals an affirmation. Oh, it will be "another happy day," she chirrups as she hears him moving about. Someone is listening, or at least has heard some of her monologue; someone is there. "That is what I find so wonderful" she sings out several times when bleakness could not be more absolute.

Can Willie make his way to a position of visibility, as she sometimes dreams? To come directly opposite her when only her eyes move at will. "Or just now and then come round this side just every now and then and let me feast on you. But you can’t. I know. Ah well." She is grateful for "many mercies."

Her monologues is sprinkled with literary allusions, many of them merely fragments. Perhaps the most familiar is: "Oh, woe is me, to see what I see," says Ophelia, after meeting the mad Hamlet. A few lines from Dante also appear in the monologue, possibly some from other poets. Spotting references in the work is still a game for many students. Such decoding, however, rarely helps to capture ‘below the line’ meanings, as they are called. Most of them, I believe, lie in Winnie’s situation, both alone and in relation to Willie. Beckett’s subject is life at the extreme, the tenuous bonds of one person to another, and to time, past and present. He strips life to its essentials: for Winnie, a black handbag carrying a toothbrush and paste, an umbrella, a revolver ("Brownie"), spectacles, a handkerchief which she flutters in Willie’s direction from time to time in her effort to get a rise out of him.

The emotional center matters more. Winnie hopes, an act doomed and determined in equal parts. There is nothing to hope for, but Winnie has memory which seems to be her trap. She has forgotten all but scraps of "unforgettable" lines and times. These comprise her relationship to the universe and, again, to Willie. Beckett’s metaphor is transcendentally clear: the ending is known from the beginning, the primacy of death being the most urgent recognition of consciousness. Yet the lines by Ms Shaw’s management are witty and humorous by turns, when the audience bursts out in laughter bigger than occasion for having been unexpected. Whereas the play struck its first audiences as "abstract" at best, now that "the shock of the play has worn off, we can see that it does have a terrifying emotional center," Ms. Shaw said in an interview with The New York Times.

"Theater of the Absurd" Beckett’s drama was called when it first appeared in the fifties, especially when it felt uncomfortably, even oppressively, close to intolerable. He stripped the play of the variables conventionally called upon to indicate character, to situate action, to define a place, to develop a plot, to project a sense of realism, and left only an idea of the existential. Winnie reassures herself that she exists by calling on her meager belongings from time to time, and calling out to Willie. A telephone rings when it’s time to sleep, though this is denied her. But as has been implied, Beckett does leave Winnie time, measurable by the rate of her sinking accordingly, time is dwindling. Or, to put the issue metaphysically, her existence matches the basic element of drama, which is time. Historical time has familiarized Beckett’s images to us, but they are no less relentlessly true.

The apocalyptic set of huge sheared off rocks, looking as if they had just been spewed forth by a glacial moraine, create the effect of an even more fragile Winnie by contrast. Beckett’s original set calls for a "mound." Willie’s clambering on all fours when he appears in Winnie’s perspective resembles an act of mountain climbing quite appropriate to the metaphor.