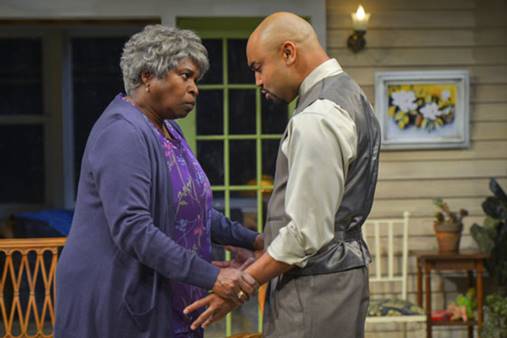 We often wonder why tragedies occur, particularly when they affect good people. It’s a question as old as the story of Job or Jesus’s cry, “My God, my God, why hast thou forsaken me?” In “Head of Passes,” playwright Tarell Alvin McCraney, a 2013 MacArthur “genius” grantee, presents us with the deeply religious widow Shelah, who, when faced with personal tragedy, prays, pleads, and confronts her God with a biblical fervor worthy of Job.

Shelah (great performance by Cheryl Lynn Bruce) lives in a remote marshy area of Louisiana where the Mississippi River divides and meets the Gulf of Mexico, known as the Head of Passes. Before the play begins, we see a man (Sullivan Jones) in a tuxedo sitting on the stage. From the cast list, we glean that he may be the Angel. He didn’t add much to the drama, except perhaps a misplaced sense of the supernatural.

In the first act, a small group of family and friends, including Shelah’s three grown children who live on the mainland, has gathered to celebrate her “important” birthday. But it’s not to be a fun party. A powerful storm creates numerous leaks in the roof. Or, more precisely, the leaks caused by the inaction of her lazy, though well-meaning son, Spenser (effective Brian Tyree Henry). “Did you know it’s rainin’ in here?” says her animated friend Mae (nice work by Kimberly Scott).
With expert direction by Tina Landau, the lively conversation flows naturally, but as the storm grows intense, so too does the tension in the household and the sense of foreboding. Shelah’s other son Aubrey (nimble Francois Battiste) fails to convince Shelah to move back to the mainland with him. Dr. Anderson (Bay Area luminary James Carpenter) was hoping to talk to Shelah’s sons about her quickly debilitating health, but she forbids him. Shelah wanted to talk with her children about her will, but no opportunity arises. And Shelah’s daughter, Cookie (impressive Nikkole Salter) has her own sad needs to address. The wordless angel makes his appearance, but is seen only by Shelah.

By the end of the first act, the storm destroys Shelah’s house. The impressive, realistic set, designed by G.W. Skip Mercier, is a marvel to behold as we watch the house physically collapse. It mirrors the destruction of Shelah’s sense of security as she is forced to focus on bitter truths about her family, her health and her home.

The second act opens with Shelah hearing devastatingly tragic news that is so unlikely, it seems disingenuous. We have left the mostly realistic first act behind and now suddenly enter the realm of Greek tragedies and the Old Testament.

This act largely consists of Shelah’s soliloquy to her God. At moments, McCraney’s language and Cheryl Lynn Bruce’s acting reaches almost Shakespearian proportions, but the length of the speech caused my mind to wander at moments. At first I wondered if my inattention was because my religious beliefs are so different than Shelah’s. But no, I was squirming because the soliloquy was simply too long and too dissimilar from the first act to be digested properly. It would have been preferable for “Head of Passes” to have been a one-act play, rather than have the audience return from intermission for the announcements of off-stage dreadful events and an attenuated oration.

“Head of Passes” was first produced two years ago by Chicago’s noteworthy Steppenwolf Theatre Company. It was then, as now, directed by Tina Landau and starred Cheryl Lynn Bruce, as Shelah.

Tarell Alvin McCraney is without doubt a talented writer. He has created an ambitious drama with depth and feeling that is well worth seeing, although it is not without some minor flaws.

This review first appeared in Berkeleyside.com