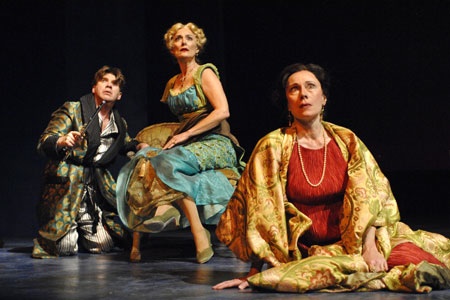 Heartbreak House is a great place to visit but you might not want to stay long. The permanent tenants, Captain Shotover (Michael Winters), his daughter Hesione Hushabye (Michelle Morain) and her husband Hector (Stephen Caffrey) seem to like it well enough, as does the faithful old housekeeper (Lynne Soffer). But when a gaggle of guests arrive it soon becomes apparent that the untidiness of the house mirrors the mess in the minds of the owners.

The captain, at 88, is reliving his days as an old salt – including the fact that he kept his men in line by means of a rumor that he had sold his soul to the devil in Tasmania – with frequent lacings of rum to dull the pain of the present. Hector, who personifies the term “idle rich,” spends his days spinning tall tales of adventure with which to enthrall the ladies drawn to his fading good looks. And Hesione, for all her intelligence, seems to have little to do other than dress outlandishly and meddle in other people’s lives.

As the play opens, that meddling extends to the lovely young Ellie Dunn (Allison Jean White) who plans to marry an older businessman, a contemporary of her father, for his money. The uptight Boss Mangan (a very funny David Chandler) is the wrong man for Ellie and Hesione is determined to convince the Boss of that, even if she has to seduce him herself. Add to this mix Ellie’s poor-but-principled pater (Matt Gottleib), Hesione’s glamorous, upper-crust sister Adriane, suddenly returned after a two-decade estrangement, her adoring brother-in-law (Michael Ray Wisely) and a burglar (Chris Ales in a wonderful Alfred P. Doolittle cameo) and you have a proper bunch of eccentrics. But, this being George Bernard Shaw, the conversation is scintillating, witty and wise.

Much has been made of “Heartbreak House” as Shaw’s response to WWI. That may be true but, in this staging, it is not evident, unless you know the play well, until the very final scene. Up till then it is Shaw as usual. The women are marvelous, clever and strong, the embodiment of the Life Force in which the playwright so deeply believed. Class distinctions are unjust and perverse; the upper class is lazy, the middle money-grubbing and the poor – ah, the noble poor. And, of course, war is hell as brought home in the flashy climax when bombs fall all around the estate while everyone marvels at how exciting it all is.

England, according to Shaw, was mired in myopic complacency as far as the war was concerned. Patriotism substituted for real political action and the upper classes, those with access to the sources of power, were most guilty of all. He waited until a year after the Armistice to publish the play but, even then, it was too much for the war-weary British public and had to go to New York to find success.

Berkeley Rep, situated in America’s own bastion of anti-war sentiment, has chosen the play to open its 40th season and, under director Les Waters, given it a very handsome production. Annie Start’s set is a splendid Arts and Crafts drawing room (although a stuffed alligator and other nautical oddities hang from the ceiling in homage to Capt. Shooter’s seafaring past). Berkeley also, by the way, is a bastion of the Craftsman architectural movement. Anna R. Oliver has dressed the actors in high style.

The actors themselves are a genuine ensemble, each having his or her own moments to shine. White is a true Shavian heroine, pretty, principled and determined to get her own way – whether that way is right or wrong. Wilder, as the snobbish Lady Utterwood, is elegant, brittle and full of world-weary ways. But it is Morain’s Hesione who stands out as the strongest character among them, her oddball ways doing little to disguise her intelligence and basically good heart. The men are equally good, each in his way, with Chandler’s Boss Mangan and Ayles’ burglar the standouts. Everybody, however, ends up with a broken heart, either from pursuing the wrong lover or an unattainable dream. It’s just that kind of house.