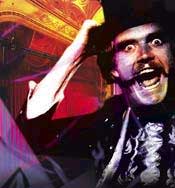 September 18 1890, Madison Square Theatre, New York City: an elderly actor feels the chill and the oppression of the constant rain. After dismissing his acting class and speaking briefly with his young leading lady of former days, he feels the hand of death on his shoulder. He is Dion Boucicault (Declan Condon), Irish-born trail-blazer of mid-nineteenth century theatre. The hand of death is embodied by the ebullient ghost of Johnny Patterson (Owen Roe), recently deceased song and dance man whose cheerful paddywhackery and clowning Boucicault looked upon with disdain. Now, on the brink of consignment to the limbo of a &#145;dark&#146; theatre where he is doomed to languish in eternal obscurity, Boucicault makes a final plea for immortality by telling the story of his life as he sees it.

Stewart Parker&#146;s fanciful reflexive biography has lost none of its power to ask pointed questions of theatrical practice. It explores the fragile space between idealism and reality where ordinary mortals endeavor to contribute to humanity, and uses the stage both as its object and its means. One of Parker&#146;s most powerful conceits is the use of the theme of obscurity, here envisioned as a particular kind of hell for writers and actors. Though not dissimilar in broad terms to Peter Shaffer&#146;s Amadeus, even its "celebrity" character is not necessarily all that well known. This makes its task of representation even more intriguing, and its outcome more ambiguous.

This production of Heavenly Bodies runs in tandem with the Abbey&#146;s lavish presentation of The Shaughraun . In the subterranean space of thePeacock, director Lynne Parker provides a welcome (and arguably necessary) counterpoint to the spectacle upstairs. Heavenly Bodies goes directly to the heart of the issues raised by production of Boucicault: what value can be ascribes to his work in the light of history, and how can a twenty first century audience respond to sub-textual and meta-theatrical subtleties which may even have been lost in the nineteenth?

In itself, Heavenly Bodies is a thought-provoking and beautifully written play which also manages to employ the pleasures of spectacular excess indulged by The Shaughraun. In contrast to the "mere" presentation of spectacle in The Shaughraun, however, Parker&#146;s play turns that spectacle back on itself, using incidents from Boucicault&#146;s work to illustrate incidents from his life, all the while deconstructing (and indeed re-constructing) theatrical practice in the context of exploring the nature and meaning of art.

Declan Condon (All My Sons) as Boucicault radiates the authority and self-confidence of a successful Victorian theatre impresario while also demonstrating the frailty of a man struggling with his sense of self-worth. It is a sympathetic and subtle characterization played with exquisite judgment through the various changes of tone, scene, and timeline. Owen Roe (Skylight) is an even greater delight as Patterson, appearing suddenly from the scenery singing an Irish ditty and all dressed in shamrock green wearing a greasy red fright-wig. Roe brings energy and chilling conviction to this demonic leprechaun figure, springing from affable buffoonery to postmodern irony to sadness and anger exactly when required. Together these two characters proffer a powerful dialectical discourse on value and meaning, and likewise the two performers come from different places to reach a common point of mutual reflection.

The play is the work of an ensemble though, veering as it does between bits and pieces of plays and scattered scenes of biography crossing time and space. Niamh Linehan (Performances) registers well in the role of Boucicault&#146;s long-suffering second wife Agnes. Pauline Hutton (On Such as We) makes both a commanding mother to Boucicault and a believable love interest later as third wife Louise Thorndyke.

It would be easy to see this subject run through any number of figures from Irish history and literature, even in a contemporary context. One could see here Brendan O&#146;Carroll as Patterson and Roddy Doyle as Boucicault, and find in the congruence of methods and apparent distance in intention an equally rich reflection of issues in the representation of Ireland on stage. The use of Boucicault in conjunction with the programming of The Shaughraun however takes on much greater resonance, especially as part of the Abbey One Hundred, and it also serves an educational function which the National Theatre has been quick to seize upon through a variety of workshops and study groups running throughout the summer dealing with both plays. It is one of the most rewarding pieces of programming in the Abbey One Hundred schedule to date, and therefore doubly an experience not to be missed.