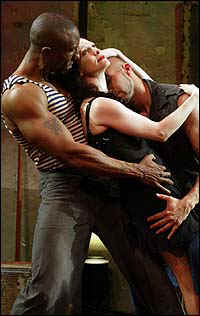 The setting is a basement saloon, presumably in a German city, Hamburg, perhaps, or Berlin. It’s a rundown place, a place that may or may not have seen better times–the ideal setting for the songs of Kurt Weill. Weill’s world-weary songs tell stories of love and loss, of passion and heartbreak, of dreaming even in the face of harsh realities. In some hands, that kind of material turns out sentimental, mushy. With Weill, it’s always hard-edged, more bitter than sweet, tinged with irony, flavored with minor-key dissonance, propelled by jazzy syncopation.

In this territory, earlier staked out by performers like Ute Lemper, Teresa Stratas and, of course, Lotte Lenya, Bebe Neuwirth finds a special affinity for her multiskilled talent. The material suits the big city sophistication which she brings to the songs with the unusual gleam of intelligence combined with empathy. Best known for her Tony award-winning performance in Chicago and her Emmy-winning performances as the long-running character, Lilith (super-smart, hilariously funny, deadpan headshrinker) in Cheers and Frasier, Neuwirth has an unmistakable voice, quite unlike any other–a not especially pretty, lower-register alto, a smoky growl of a sound that works wonders with informed reading and thoughtful phrasing of these drama-laden ballads. (Once or twice, she forces a big note, but her instrument isn’t up to it and the sound is delivered with a distressing wobble. Neuwirth smartly avoids this trap most of the time–there’s no need for her to belt when she can achieve the drama so well otherwise.)

Jenny is an expansion on the character from The Threepenny Opera, a hooker and the sometime lover of Mack the Knife. Here she is left shrouded in mystery, revealed only through the songs themselves (there is no dialogue). Included from Threepenny are "Pimp’s Ballad" ("In that old whorehouse where we built our nest") and "Barbara’s Song." There’s another song from a Jenny character–"The Saga of Jenny" from Weill and Gershwin’s Lady in the Dark ("poor Jenny, bright as a penny"), which here provides welcome comic and upbeat relief from the angst-ridden material that dominates.

There are three male characters on stage with Neuwirth–two rough-trade customers of the bar (both first-rate singers and dancers) and the barkeep, who joins her in "Pimp’s Ballad." They provide moments of respite for the star and the dancers work with her on two fine dance numbers, a body-slapping "Song of the Big Shot" and a show-stopping tango. Choreography is by Ann Reinking (who won her own Tony for Chicago) and one could only wish there was more dancing–Neuwirth is a dancer first, as she is the first to attest. The onstage piano accompaniment was flawlessly performed by Diane Hidy.

Timing seemed a bit tentative on opening night; the direction could use some tightening. The show had a successful summer run in New York last year, so it is resuming in San Francisco after a seven-month hiatus. Doubtlessly, it will sharpen up as the cast settles in for the current run. And what a pleasure it is to hear once again such hauntingly memorable pieces as "Alabama Song" and "Surabaya Johnny," sung with verve and intelligence.