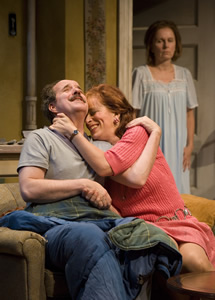 Is it blasphemous to say that John Guare’s The House of Blue Leaves is a little dated and mostly fluff? Not that there is anything inherently wrong with the acting or production at the newly renovated Mark Taper Forum. All concerned conducted themselves quite nicely, thank you. It just seemed to be more form than substance and a little creaky.

There are some universal truths such as Artie Shaughnessy’s middle aged angst and his dream of making it big — in Artie’s case it is as a song writer. And then there are the real mixed emotions of being married to someone who is certifiably mentally ill — feeling trapped by the obligation, fantasizing escape with someone lacking all that baggage, yet feeling the tug of devotion. In House of Blue Leaves the sick someone is called Bananas (not very P.C.) and the one offering escape is Bunny, a vapid and bubbly woman in late middle age who willingly goes to bed with Artie, but will not cook for him until they are married. Artie drools over her descriptions of gourmet dishes, while he feels the tug of obligation and residual affection for Bananas.

It is all set in Queens, which is so near, yet so far, to the Big Apple where one could make it big. Really big. Artie’s songs are banal trifles that he performs gratis on amateur night at a local bar; they even charge him for his own beer. Their son is messed up, but it is 1965 and the pope, himself, is coming to Queens. Bunny, the girlfriend, is practically flying. She feeds Artie, and deludes herself, on the dream that they will go to Hollywood on their honeymoon and his boyhood friend, Billy Einhorn who is now a big director, will give Artie the break he needs. The pope will bless Artie’s music and good fortune will descend on them. Bananas will be tucked away in an asylum which Artie has christened The House of Blue Leaves. All will be wonderful, except it won’t. I will leave that for you to discover should you decide to go see it.

Guare has a deft ear for catchy dialogue coming from simple people, yet after the first few minutes it starts to feel like another far fetched sit-com. Not a bad one, preposterous, amusing, but leaving nothing of substance behind. Remember, I Love Lucy was fun too.

Blue Leaves had a revival in the 80’s at Lincoln Center. It was a major success, so call me jaundiced, but it seems more like the superficial offerings seen at the Geffen in recent years, than the more substantial fare Taper audiences have become accustomed to under artistic director, Gordon Davison. I had been known to exit the theater during his realm muttering something like, "how about something by a dead white guy?" as his selections sometimes bordered on the ultra P.C., but you could not say they were empty. Hopefully Michael Ritchie will take up some of that tradition as he settles in.

This is the opening offering in the newly renovated Mark Taper Forum, the only part of the original Music Center that boasted of interesting architecture. Disclosure: I am not a fan of what is now called "mid-century" architecture, at least not as was practiced by Welton Becket, the Music Center’s creator. But the design I lauded from its exterior, on the interior the Taper was a dated and uncomfortable experience for audiences as well as performers and producers. The seats were incredibly cramped; at my monumental 5′ 6" it was impossible to sit with my legs straight forward, let alone crossed. The good news is that there has been a slight improvement: through a slight of hand involving fewer aisles that are easier to negotiate the theater now boasts of about as many seats as always but a bit wider and a bit (I stress ‘a bit’) more leg room. With a diagonal slouch my legs can now cross. What the poor six footers do, I have no idea.

But there are more major changes. Backstage was, from the git-go, a poorly conceived, cramped space carelessly concocted from the leftovers created by the circular building design. That, by all reports, has been generally remedied. Worst of all, from at least half the audience’s point of view, the women’s room had a total of 5 stalls, for a 700 plus capacity house, causing enormous lines and annoyance. There was also virtually no lounge or lobby space. Here is where the magic does happen. By commandeering space from the parking lot below, there are now bathroom facilities on a newly created lower level with a large lounge and 16, count them ladies, 16 stalls. A real design defect that has been rectified. On the entry level the lobby space has been enlarged so it is much more of a meeting space.

All of the alterations have been made with sensitivity to the era in which the building was designed and worthwhile elements, such as the mosaic abalone wall in the foyer, have been retained. Acoustics still need some tweaking, but hopefully the technical upgrades will make that a possibility.

The original building was from the 60’s as was The House of Blue Leaves. By that reasoning it is an appropriate inaugural selection … now let us see something of substance.

(9463)
$6.94 (as of January 21, 2021 - More infoProduct prices and availability are accurate as of the date/time indicated and are subject to change. Any price and availability information displayed on [relevant Amazon Site(s), as applicable] at the time of purchase will apply to the purchase of this product.)