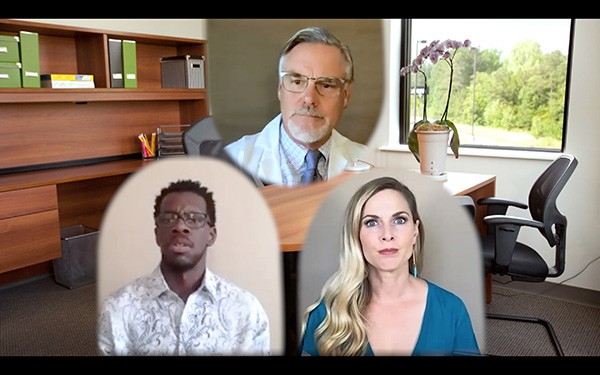 Two couples utilize the services of a fertility clinic. Good news: There’s now a baby on the way! Bad news: Couple A’s embryo was mistakenly given to Couple B.

To the already high emotional stakes, add this wrinkle: One couple is mixed race and liberal; the other white and staunchly conservative. Navigating the immediate and long-term shared outcomes of this procedural kerfuffle leads to surprises and self-revelations in the comedy-drama “Human Error,” receiving an online West Coast premiere by the North Coast Rep.

The story begins as empty-handed Madelyn (Allison Spratt Pearce) and Keenan (Terrell Donnell Sledge) learn the distressing maternity news from Dr. Hoskins (Martin Kildare), who is sweating bullets as he calculates the odds of a malpractice suit and missing his next boat payment. Because the good doctor has no good answers to offer on how the parties should move forward, the overwrought couple initiates a meeting with mom-to-be Heather (Jacque Wilke) and her husband Jim (Max Macke), at their affluent suburban home in Ohio: A community that Madelyn and Keenan find unsettling with its uniformity of house design, landscaping, family vehicles and lack of ethnic diversity.

Jovial Jim, who owns a booming car-stereo business, tries to bond with academic researcher Keenan by calling him “bro” and, like a kid wanting to show off his toys, Jim eagerly asks: “Want to look at my guns?” Meanwhile, childless career women Madelyn and “domestic engineer” Heather, who already has a brood of three boys, struggle to find common ground. Discussions on lifestyles, politics and religion end in awkward silences. Quite a surprise, therefore, when Heather announces: “We want to have this baby for you.”

This allows ample time for more quality time during the pregnancy for the couples to bond in endearing as well as uproarious comedic ways. So close does the foursome become in their shared experience that when Heather’s contractions start, they all go into labor.

Also giving birth is the North Coast Rep, which is one of the first theaters in the nation to bring a play to audiences in an experimental online broadcast format: Costumed cast members, performing in their homes, were recorded on Zoom from three different angles. Through advanced editing techniques, cast member images appear as cameos against a changing array of scenic backdrops, creating the illusion of the characters interacting together in the same space. An extraordinary arrangement with Actors Equity Association was also required for the show to go on.

But does technology get in the way of audience enjoyment? Thanks to standout performances by the cast, the magic of theater is not lost.