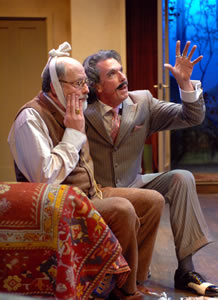 We live in the age of the hybrid. We have hybrid plants and cars so why not a hybrid play? Like Terry Johnson’s “Hysteria,” for example: an eclectic mix of high tragedy and low farce dealing with issues as serious as cancer, child abuse and Kristallnacht, set against a surrealistic landscape that could have been painted by Salvador Dali, himself a major character in the play. Doors slam, women lose their underwear, men their pants and everyone their dignity. And yet it is all very sad since it is the morphine-induced dream of a dying Sigmund Freud. Or is it? It’s as if Freud, like Alice, fell down the rabbit hole and pulled the audience with him. It’s not an easy feat and that it works at all is a credit to Johnson’s writing skill (the play won a 1993 Olivier award when it bowed in London), Aurora Theater’s spot-on cast and deft direction by Joy Carlin.

Warren David Keith is a masterful Freud, querulous and quarrelsome as he relives his past following a morphine injection that sends him spinning into La-La Land. Even at his funniest, however, the actor projects the sadness and fear of the aging, cancer-ridden psychoanalyst as he looks death in the face, regretting many of the choices he made in life. It is somewhat the same with Nancy Carlin (the director’s daughter), who plays Jessica, a young Englishwoman who barges in to confront the good doctor with the ghosts of patients past. Carlin is very funny, especially in the beginning when she repeatedly sheds her clothing as a way of blackmailing Freud into listening to her. But, once she gets going, reading the diary and reciting the events of her mother’s life – the mother being a former patient of Freud who committed suicide in an asylum – she generates a deep sympathy. So too with Charles Dean as Freud’s friend and doctor and the witness to all this madness. The playwright makes Dr. Yahuda the spokesman for Europe’s beleaguered Jews, suffering and dying under Nazi oppression (Freud, himself a Jew, fled Vienna to England, where this story takes place, in 1938). Although Dean is an accomplished clown and has some inspired business involving a bicycle and the aforementioned abandoned lingerie, there is nothing funny about what he represents.

The only unadulterated comedy in the whole thing is the presence of Salvador Dali, played in an inspired, over-the-top portrayal by Howard Swain (Nancy Carlin’s real-life husband). With a pronounced Spanish lisp and even more evident curlicue moustache, Swain swaggers across the stage in two-toned shoes with white socks, sometimes in his underwear (costumes by Callie Floor), like an egomaniac on speed, generating another kind of hysteria than that referred to in the title of the play – that of uncontrollable laughter. Although the others received their due, his bravura performance generated wild applause on opening night. And deservedly so. Kudos also to lighting designer Jon Retsky and sound designer Chris Houston for the scene in which the action moves from tenuous probability to psychedelic nightmare.

The playwright has done his homework. Much historical fact is present to hang his fantasy upon. Dali actually did visit Freud in 1939, shortly before the latter’s death, and drew a sketch of him that makes him look already a skeleton. Freud really did explore human sexuality and the possibility of repressed childhood memories of abuse. He also famously collected aboriginal artifacts and displayed them on his desk, inspiring a generation of analysts that followed to do the same (here they are hilariously used as weapons in a battle between Dali and Jessica with some inspired catching from Dr. Freud). “What I have become is not so much a man as a museum,” Freud muses at one point. Terry Johnson, who was inspired to write this play by Jeffrey Masson’s New York Times article and subsequent book on the fallout from Freud’s theories, takes us on quite a tour of that museum.