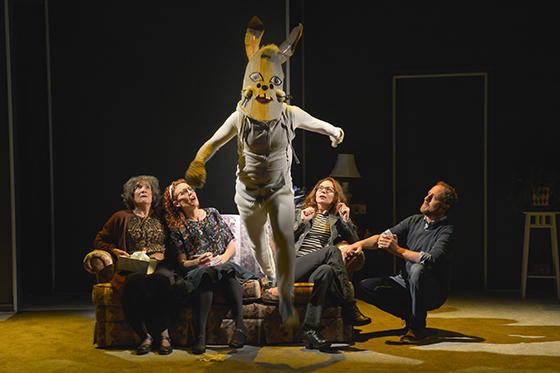 Daniel Handler, aka Lemony Snicket, author of the wickedly gothic children’s books, “A Series of Unfortunate Events,” is presenting his first play, the amusing “Imaginary Comforts, or The Story of the Ghost of the Dead Rabbit” in its world premiere production at Berkeley Rep, skillfully directed by Tony Taccone.

Instead of the bland admonishment to turn off one’s cell phones, the evening begins with a funny off-stage intro by Handler that sets the mood for the lively, silly, yet at times expressive, but always curious series of coincidences among the characters who come together around the life and death of Dr. Marcus Gold. All the many short scenes that comprise the one-act “Imaginary Comforts” are out of time sequence, and part of the evening’s exercise is fitting the pieces of the plot together in a logical order. So it is only at the end of the play that we are able to understand how the characters interact and influence each other’s lives.

“Imaginary Comforts” begins with the scene of a tinder-type coffee date between Clovis (Michael Goorjian), who we later learn is a recovering addict, and Naomi, a young “rent-a rabbi” (that is, a rabbi without a congregation who is available for weddings and funerals). Naomi (Marilee Talkington, “Xs and Os”) is bemoaning her struggle to prepare a proper eulogy. The comedy begins straightaway as we learn that Clovis thought that Naomi’s profession was rabbit, not rabbi. Yet, as she points out, he still wanted to meet her. Rabbits and a story about rabbits become very important later in the play.

In the next scene, Sarah Gold (Susan Lynskey, “Roe”), daughter of the newly deceased Dr. Gold (who we also see alive, played by Julian López-Morillas, “The Winter’s Tale”) has engaged Naomi to perform the eulogy for her father’s funeral. Bungling but adorable Naomi is trying to figure out what to say about him, with little help from Sarah, Dr. Gold’s friend Jack (Jarion Monroe, “Volpone”), and a sobbing, though hysterically funny Mrs. Gold (Sharon Lockwood, “It Can’t Happen Here”). And, when given, Naomi’s eulogy is by far the worst ever, ending in an existential cry about how we are all alone.

“Imaginary Comforts’” direction and acting are first-rate. Danny Scheie (“Troublemaker, or the Freakin Kick-A Adventures of Bradley Boatright,” “Masterbuilder”) is impish, yet restrained, as his part as the ghost rabbit requires. One highlight of the play is the brilliant and effective stage set (scenic design, Todd Rosenthal, lighting design, Nick Solyom), which features lighted doors with door frames of different colors and a moving concentric circular stage.

Written soon after the death of Handler’s father, the precipitating spur for “Imaginary Comforts” was Handler writing “rabbit” in his calendar instead of “rabbi.” And though Handler’s father’s funeral was nothing like Dr. Gold’s debacle, Handler wondered about what would happen if a rabbi ruined a memorial service. The plot line about the inept, although well-meaning rabbi is amusing; and the many jokes about the Jewish people and their guilt and other clichés are funny only to a point, although they seemed to be accompanied by laughs of recognition by the opening night audience.

Once the playwright left the strictly comedic style employed early in the play, and veered toward the more abstract and absurd world of coincidence and roundelay, the production seemed to lose a bit of steam. If it was aiming toward fantastical and magical, it never quite made it. But behind the shtick and the sometimes too-clever-by-half aspects of “Imaginary Comforts,” are some truths about life, death, mourning, helping others and the importance of friends and family.

This review originally appeared on Berkeleyside.com