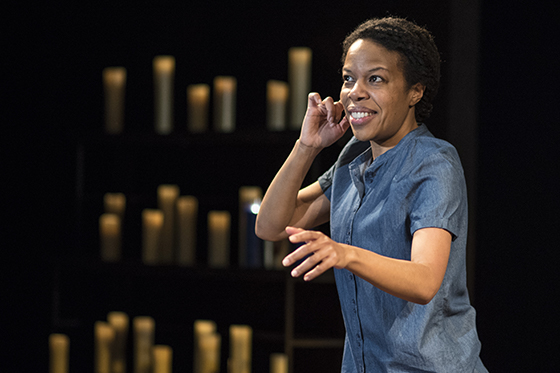 News of Hurricane Sandy’s projected landfall gives New Yorkers little time to prepare, but whatever the mysteries of nature, certain New Yorkers, the poor, and working class, mostly members of oppressed nationalities, mostly the women among them, know one thing for sure: the deck is stacked against them. With a child debilitated by a serious handicap, Evelyn is a mother whose partly-natural and partly-curated disposition is to confront and solve any problem that comes her way. Faced with an acute scarcity of resources, that inclination meets with a sharp rebuke. It comes, like a weather system of its own, in waves, and inhabited by people close to her, each of who harbors a pressing need that comes petitioning in advance of nature’s certain storm. They may or may not intend to throw Evelyn off her course, but their own force of nature is irrepressible: they would have her shelter in place to host the storm brewing in their lives.

Evelyn is the Puerto Rican mother who parries her optimism and survival skills against an onslaught aided and abetted by injustices that drop deciduously and predictably on certain communities but not others: more so when high winds and a downpour coalesce. For seventy-seven minutes, Nilaja Sun will beam up a constellation of characters she created and wrote. They are members of one family, and include Evelyn’s physically impaired daughter Candace, and brother Manny, who comes back from the war in Afghanistan with a bill of particulars for redress. He carries his own personalized collection of wounds that need attention. There is an elderly grandfather, more a human time capsule than a relic from the past. None of the pieces in this sharp-edged jig-saw puzzle, micro-planed by humor, fit together neatly into a transportable unit that can be evacuated, tended to, and saved from certain loss, without Evelyn living not only living her life, but the lives of others in her life. In fact, Sun is not only Evelyn, but also the others in Evelyn’s life.

“I don’t play favorites with my characters,” says Sun, “because I have to be each one. So I live in the moment as it comes up, and whichever one I am, is my existential favorite. Because I write them as deeply as I know them, this is not as challenging as one would think.” Where do the characters originate? “They come from a heart that I must keep open, and then the head. I have to channel their physicality, not just in voice and body, but emotionally.” The price Sun pays is high. When in performance, no matter how interesting the surrounding locale, she confines herself to what she terms a “monastic” existence. She consciously chooses isolation, in order to keep the actor’s only instrument, herself, in pristine condition. “Even my mother recognizes that I can’t spend more than ten minutes talking by phone. I love her, am interested in what her life is about, but can’t shift my focus for too long. It has to be on my audience, and how the public receives my work.”

She eschews political news—does not want the story she is telling to become just one more random chunk of grist for the anti-Trump mill that generates cheap hysteria on a daily basis. “The situation I’m leading the audience through existed before Trump,” and I can’t and won’t get caught in those maws if I am to bring the energy necessary to give each audience the quality of performance it is entitled to.”

For Sun, the writing process was aimed at capturing the specificity of Hurricane Sandy in New York City, in one of its most pauperized neighborhoods, where social services are at a premium or non-existent. Over the five-year period that she has been performing the show, she has not been tempted to rewrite it. “A word or two here or there, but my intention is to see whether it stands up to the test of time. The language is specific to the period and circumstances, and so I want to keep it as faithful as possible to both.”

Which of Sun’s characters is charged with carrying most of the emotional freight? “I’m not trying to dodge the question,” she says, “but each one of them is burdened with telling his or her story, and whether I like or don’t like that story is beside the point. I find that, as the one playing the role, I have to take on the inner life of that character to make his or her motivation mine. This is a situation where I’m obligated to look at both sides of a question, and in the quiet of the night, give careful consideration to the feelings that come up, so that I see what the character sees.”

I wonder about the Berkeley Rep audience. Though it includes a sizeable number of people of color, it is by and large, upper middle class in its composition. Will this be just another story about how the other half lives that plays on the guilt of class privilege, or will there be a universal gravitational pull?

Sun believes that her role is to tell the story. She insists that the theater’s role is to carry out due diligence in scaling the price of tickets so that the performance is affordable for all interested parties. “It is uncomfortable to have your work shown in a theater where the wealthy occupy the front of the house, and those without deep pockets are consigned to the back rows,” says Sun. The same applies to ADA seating. “Are all the ADA seats in the rear or on the sides of the house?” she asks. That kind of arrangement can speak louder than the show’s production values and become a subversive subtext. She often sees theaters where such logistics are left to the discretion of young, inexperienced interns, whose focus is not yet trained on the big picture.

Ultimately, Sun wants to generate an educated, intentional optimism wherever she takes her work. At the show’s end, she would like each audience member to rise from his or her seat, realizing how possible it is to simply get up and walk out, to willfully use his or her body, unassisted. She wants that consciousness to extend to coming to the aid of fellow human beings, particularly returning PTSD-impacted veterans who carry physical and emotional damage. Without a means to express that anti-social anger, mass shootings, such as the recent one at the Thousand Oaks bar, fill the vacuum. Instead of focusing on the guns the shooter brings to the bar, and blaming it all on Trump, Sun would advise us to take a good look at a 30-year war with no social purpose or foreseeable end, that drives a ruined soul to destroy whoever happens to be hanging out in a nearby campus bar. Rather than viewing this layer of demoralized veterans as a basket of marginalized deplorables, Sun hopes that we will see them as we do ourselves, see them as us, and help each other get to where we and they want to go in life.