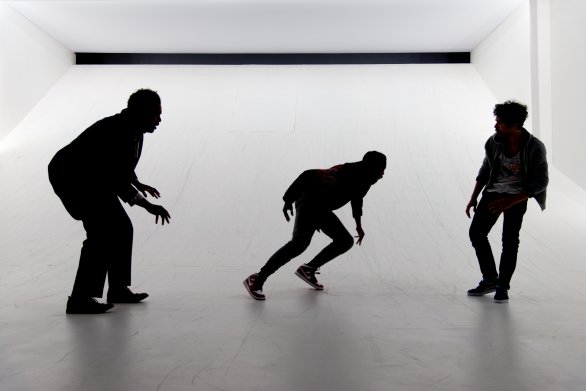 In James Ijames’ new play “Kill Move Paradise” the Wilma Theater stage is transformed into blindingly white, perilous slope with a portal at the top that characters come tumbling out of. It depicts what Ijames envisions as the bardo- a Hindu spiritual way station between life and death. It is also Ijames gladiatorial arena for his polemic that confronts violence against black men in America in 2018.

Matt Saunders’ set, in tandem with Thom Weavers lighting design is minimalism at its best, devised to keep the focus of text and performance. Among the issues Ijames articulates through his four characters, is the reality of people of color living always having to navigate the seemingly endless manifests of racial injustice in America. A social status quo that long ago should have been consigned to the ash heap of American history, but in reality, on any given day, an unarmed American citizen can be gunned down by law enforcement (or ‘security’ guards) for living while black or brown.

The latest arrivals meet in the ‘bardo’ and try to reconcile their fate as they spar with each other, express their rage at being ripped from their lives and expose the scars that they have endured living in a perpetually racist country. The opening scenes with Isa (Lindsay Smiling) the oldest arrival, completely disoriented, but with the distinct feeling of déjà vu. Grif (Anthony Martinez Briggs) a young bi-racial man tumbles through, tries to shake off being dazed and confused, but as they draw each other out and start to piece things together what has happened to them.

Daz (Brandon Piece) is the next man to come rolling down the slope and he is pissed off from the start, he has some immediately perception that the group is in a twilight zone. Incongruously he has brought along a lawn chair and reports that there is a whole lot of stuff in stored along the way to the trap door- from the latest tv widescreens to the remains of legendary blues singer Bessie Smith.

Then Tiny (Avery Hannon), the youngest to arrive, reacts to the others as if it was just a normal payday encounter, until he tries to go home, remembering his mother’s warning not to interact with people he didn’t know. He tries to run up, repeated, the steep slope to escape back through the door and finally gives up with exhaustion and struggling to breathe.

A crumpled paper rolls onto the set and Isa reads out what are instructions to these men, to orient themselves for this next journey. Isa intimates that “I’ve been here before” which can be read in reference to Biblical allegory. They have flashbacks about the moment they were ripped from their previous lives. Someone asks do you know what you were doing “when “and they all know what it is reference to- the moment that they were killed.
Daz and Gif tell Isa to read the fax list and this scene just cuts to the heart and mind in its inescapable truth. It is one of several thundering dramatic moments, that Ijames doesn’t just ‘break’ the fourth wall between performer, characters, plot and reality, he eviscerates it.

Tiny, who has been clutching a toy gun, tells the others that he saw somebody get shot. Ijames’ alludes to the real life murder of 12-year-old Tamir Rice, on in Cleveland in 2014 who was killed by police while in a park playing with a toy gun. Isa, Daz and Grif try to ease Tiny into their new reality, but Tiny insists they play his game- Aliens and Cowboys. But soon, Tiny brings everyone to their new reality by describing how he felt, his soul being ripped from his heart, the blood feeling warm but flowing out of him.

At various times, the characters observe the audience and ask “what are they doing?” “They like to watch” Grif taunts. Daz, Isa and Grif sing a smooth doo-wop song complete with vintage Motown choreography. Tiny confronts the audience with the missive “is this what you want to see?” and repeatedly, he asks the audience “what are you afraid of?” Ijames makes direct reference to playing to white audiences who can afford to go to the theater.
They contemplate their fate, flashback to moments in their lives and reconcile their powerlessness. The specific backgrounds of Tiny, Grif, Daz and Isa is revealed only in fragments, but it is Ijames intends to show all sides of their humanity and identity as black men, but doesn’t fulfil the expectation of things being theatrically resolved.

Ijames has written a challenging and fine actor’s play and Zizka directs a remarkable ensemble of actors, starting with an unforgettable performance by 14-year-old Avery Hannon as Tiny. Brandon Pierce makes an equally strong debut as Daz. Lindsay Smiling and Anthony Martinez Briggs, two of the most versatile members of the Wilma’s Hot House ensemble, equally memorable. Zizka’s potent use of physical theater (with choreography by Silvana Cardell) uses the challenging space in ways that underscore the intense themes.

Kill Move Paradise is bold, conceptual, living theater, demanding to be heard. Ijames a vital voice in politically seditious and most perilous time. It is also profoundly poetic in its dialogue and characters. The play premiered in 2017 at the National Black Theater, NY and in 2018 produced at the Know Theater, Cleveland, OH, both productions critical and commercial success. Since 2010 Ijames has emerged as one of Philadelphia’s most prolific and dynamic playwrights. He has also long been associated with the Wilma, his home base as an actor and Hot House collaborator.