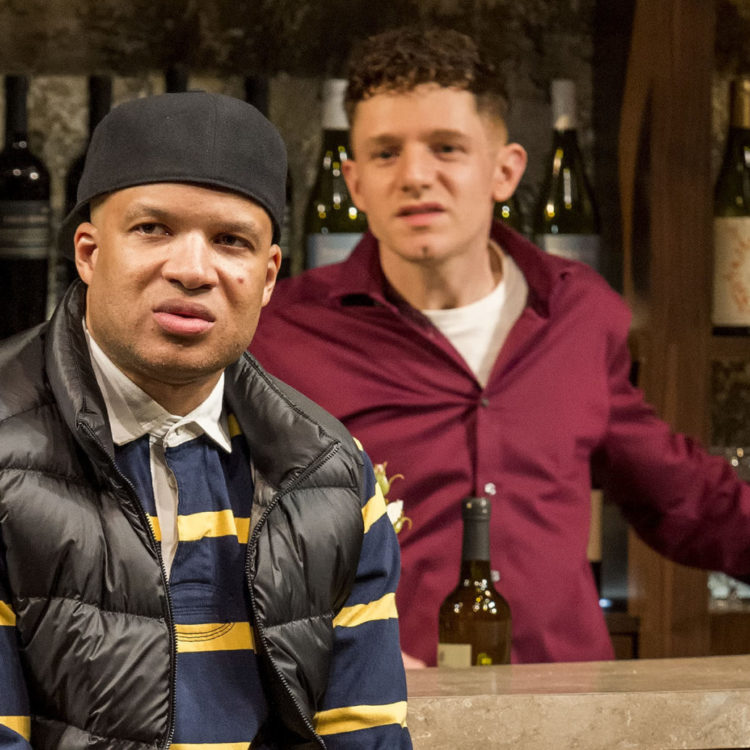 Two guys from Cleveland yammering away about LeBron James and the Cavs. For the better part of two hours. Now if you told me that, it would not have drawn me in, but not so fast. The yammering is first rate, written by Rajiv Joseph who brought us the very creative “Bengal Tiger in the Baghdad Zoo.” The dialogue has much the cadence of his first offering. However, this quotidian investigation of male friendship cuts more closely to life as we know it.

Matt (Chris Perfetti) is a young white guy tending a basement wine bar in Cleveland. His passion is basketball. His dream is to open a sports bar in the heart of the city where basketball aficionados can gather and bask in LeBron glory. To the major disappointment of his parents he never finished college. Given that, they want him to return home and join the family business, a store called Armando’s which is a mish mash of reupholstery, alterations, and curios. It is named for the stuffed Armadillo in the window. He only wants to return home for meals and laundry. Nothing else. He has gotten himself into a bind and advertised for sale his season tickets to the Cleveland Cavaliers. Shawn (Glenn Davis), a lonely black guy gets wind of it. Shawn has recently graduated from college. He works three jobs, including short story writing, to pay off his student debt, but has promised himself he will get tickets to an actual game when he gets his hands on some money. Selling his first short story has provided the means. He sounds like the son of Matt’s parents dreams, and Matt sounds maybe like a kid from the other side of the tracks. Despite Matt’s many complaints about his parents, he has attended games for years with his dad. Shawn has never seen a live game and we learn little about his parents..

The arc of “King James” is simple. Lots of guys love sports. Lots of guys bond over sports. If you listen closely, however, that bonding may contain many layers.

It all begins in 2004 when James is a promising rookies. They haggle over LeBrun – does he have more potential than Michael Jordon — and they haggle over ticket prices; they scuffle over their beloved Cavs’. trivia. The friendship blooms. Ultimately Shawn buys the tickets at much less than Matt’s fantasy price. Shawn is a lonely guy. He has no one to go with and invites Matt. They attend together for many years. 2010, tragedy strikes. LeBron, a native Ohioan, coldly announces he is abandoning Cleveland and his adoring fans for the glory of signing with Miami. Cleveland is devastated. Matt and Shawn are bereft. It feels like life is not worthwhile for their beloved Cavs. or maybe for them. The mood is as grey as Cleveland skies. Lebrun has abandoned Cleveland and Shawn is also about to flee to California, to take a meeting that might seal his future as a screen writer.

Life for the two men also has its ups and downs. Matt opens the sports bar of his dreams which booms along with LeBrun’s career only see it fail with the star’s flight to Miami. Shawn makes it to the writer’s room of a successful series, the sole African American in the room, only to be frozen out when he makes a suggestion about an insensitive line. Matt has ended up back in his parent’s shop after all, and Shawn is not sure where he’s going.

That one actor is white, and the other black, initially feels like colorblind casting. Nothing is as casual as it appears. “king James” is not really about basketball, and neither author nor Director is colorblind. Matt refers to someone as not knowing “his place” and Shawn bridles, seeing it as a racial epitaph despite the context. Matt does not get it. Yes there are bruises, but this is a true friendship which survives the tension. For reasons of wokeness, before the play began the Taper spokesperson addended the announcement about looking for the closest exit in case of emergency, and turning off cell phones, with a glib reference to the land beneath the Taper once having belonged to native Americans. The friendship portrayed between Matt and Shawn is more likely to do more for cultural awareness than the perfunctory nod out of nowhere.

Davis and Perfetti each have a long string of credits to their names. The casual talk and wads of paper dunked into waste cans make the dialogue flow smoothly. Is “King James” likely to become a classic, probably not. It does not have the bite of “The Bengal Tiger.” Even LeBrun’s story will fade. However it is terrific theater. The fact that the story rests on real sports history should make it an easier sell for that sports-fan-significant-other. The fact that LeBrun’s story made national news makes it easy for the rest of us to accept.