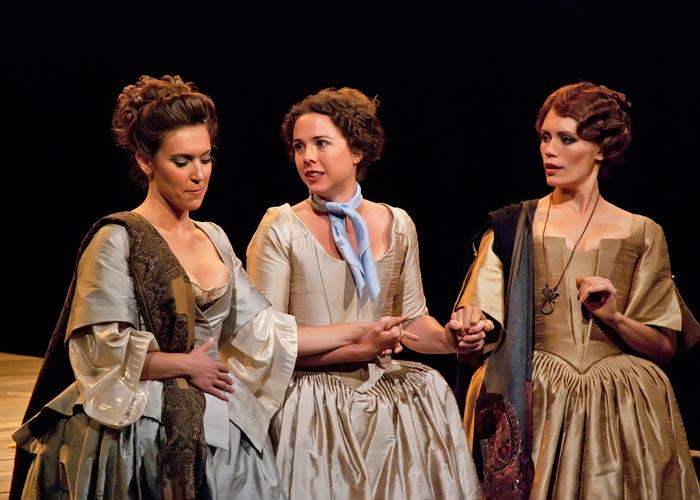 Left to right: Aubrey Saverino as Regan, Catherine Gowl as Cordelia
and Emily Swallow as Goneril in “King Lear” at The Old Globe.
Photo courtesy of The Old Globe

I once heard an English professor tell his class that, for him, “King Lear” was the most “real” of Shakespeare’s tragedies. “I will never be prince of Denmark,” he said, “but I do have three daughters.” I hope he came out better than Lear.

The Old Globe’s production of the iconic “Lear” is solid, if not spectacular. The play opens as a retiring Lear (Robert Foxworth) seeks to divide his kingdom among his daughters—they need only express their love for him to receive this bounty. Goneril (Emily Swallow) and Regan (Aubrey Saverino) have no trouble meeting this simple test, expressing their love with ad-agency hyperbole. Cordelia (Catherine Gowl), Lear’s youngest and favorite daughter, is less effusive but more genuine. This subtlety is lost on Lear. Enraged, he sends her away. When the Earl of Kent (Joseph Marcell) protests, he is also banished by the king. For the rest of the play, Lear and everyone he loves are punished for these errors in judgment.

Meanwhile, the Earl of Gloucester’s (Charles Janasz) bastard son, Edmund (Jonno Roberts), uses trickery to usurp his father and half-brother Edgar (Jay Whittaker). As is so often the case, the villains steal the show. Edmund is downright gleeful as each deceitful turn bears fruit. Likewise, the fiery Goneril and chilly Regan, though less calculating than Edmund, are equally riveting as they continually dishonor their father. The performances of Roberts, Swallow and Saverino hold this production together.

While Foxworth takes a nice turn as Lear, he does rush his lines from time to time, particularly when angry, and Lear is often angry. Whittaker’s Edgar is naïve by design, but Edgar’s alter ego, Mad Tom, is a bit over the top. However, Janasz plays Gloucester with understated terror.

Adrian Noble’s direction is fast-paced and mostly on the money, and the set is functional in its minimalist style. The fights and Gloucester’s torture scene are nicely rendered, though the latter might be a bit realistic for the squeamish. The costumes work, though the military uniforms are a bit discordant, seemingly ripped from Soviet propaganda posters.

When Shakespeare is done exceptionally well, it gives you chills. The Globe’s rendition of “Lear” doesn’t quite get there, but is a worthy performance.