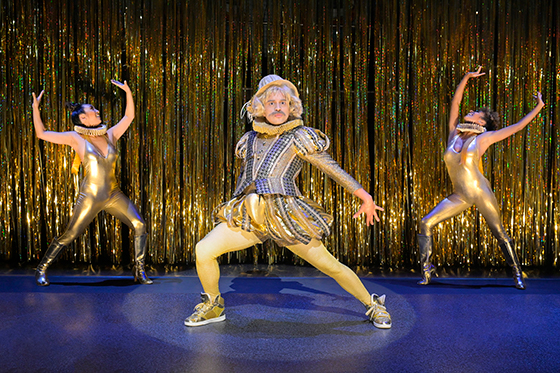 There’s nothing better than a bright and boisterous musical show to enhance one’s mood — and boy, do we need a mood-changer these days. “Kiss My Aztec!,” with its book co-written by John Leguizamo (“Latin History for Morons”) and Tony Taccone, the Rep’s departing artistic director, certainly improved the ambiance of the Rep’s Roda Theatre on opening night, June 6th.

This two-act world premiere extravaganza bombarded the audiences’ senses with pulsating and pleasing Latinx-influenced rap, hip hop, merengue and salsa music written by Benjamin Velez and original, clever lyrics by David Kamp, Benjamin Velez, and John Leguizamo. With the music, singing, dancing, costumes, special effects and the talented band of (mainly) New York actors, the plot of the light-hearted and gag-filled Latin-centric comedy, although filled with topical references, is almost secondary to the spectacle.

Set in the 16th century in Spanish-occupied Mesoamerica, most of the Aztecs have been conquered, except for a small band of partisans. Establishing the tongue-in-cheek tone, the first musical number, “White People on Boats” makes references to all the countries that have feared white invaders over the years, including Vietnam.

The small group of Aztecs who plot to overthrow their captors are led by the feminist fighter Colombina (terrific Yani Marin) and yes, a puppeteer, Pepe (excellent Joél Pérez). They need to invade the citadel of the Spanish viceroy, Rodrigo (Al Rodrigo). But extravagantly-outfitted Rodrigo has his own problems: a gay son Fernando (talented Zachary Infante plays two roles) who’s in a relationship with a priestly inquisitor (Chad Carstarphen), and a daughter, Pilar (Desiree Rodriguez) who is reluctant to marry her father’s politically-motivated choice. So Rodrigo hires a coke-snorting French fixer to seal the deal (well-played by Richard Henry Ruiz), but he is kidnapped by the partisans who usurp his role for their own ends.

You may already get the idea that“Kiss My Aztec!”has a complicated, funny, bawdy plot, reminiscent of a Shakespearean comedy. And by the way, the English spoken by both groups is sprinkled with Elizabethan grammar as well as modern Latinx slang, accompanied by a steady blast of four-letter words.

For, after all, “Kiss My Aztec!”is at heart an old-fashioned comedy, with a Latin perspective, filled with lots of sight gags, set and costume changes, noise, and great music, like a brassy Broadway musical. Political correctness flies out the window between burlesquing the gay relationship between Fernando and his inquisitor, and Pilar’s song, “Dark Meat,” sung as she dreams of a Latin lover. All in good fun, but at times it felt a bit dated, nonetheless.

The pace of the production is breakneck, so it’s easy to miss the occasional morsel of lyric. Director Tony Taccone kept all the action moving seamlessly — not an easy job. He described “Kiss My Aztec!”best when he said, “It’s like directing “Animal House.” It’s sort of a comic free for all. … It’s a Latin mash-up. It’s designed to make you laugh – out loud – as well as make you think a little bit.”

This review first appeared on Berkeleyside.