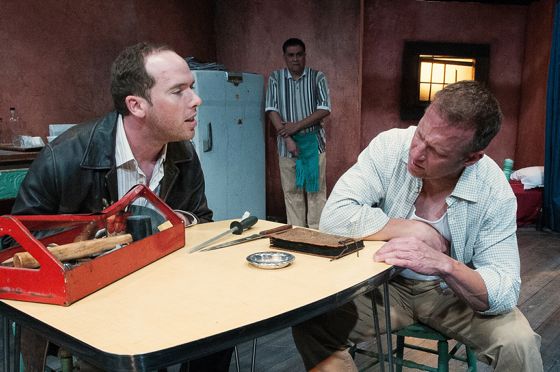 Sam Shepard is known for his in-your-face, verbally and physically violent brawls between brothers or between fathers and sons. His plays like “True West,” “Curse of the Starving Class” and “Buried Child” helped Chicago’s Steppenwolf Theatre Company create its reputation for confrontational theater. He also influenced playwrights like Martin McDonagh, whose 1997 play “Lonesome West” pits brother against brother in a Shepardesque (and very Irish) way.

The Artistic Home takes up the fourth Shepard play in that lineage, “The Late Henry Moss,” and gives it a rousing production in its storefront space on Grand Avenue. Despite opening night lighting glitches, the production clearly shows the acting chops of this ensemble.

As the play opens, Henry Moss (Frank Nall), although already dead, dances to “Besame Mucho” with his lover, Conchalla (the sexy and charismatic Yadira Correa). Then he takes on the corpse position, completely covered by a blanket on a cot in a rundown cabin in the New Mexico desert near Bernalillo. His older son, Earl (David Vogel), sits on a chair at his side. Earl has arrived from New York, summoned by neighbor Esteban (Arvin Jalandoon), who thought Henry was “in trouble.” Soon his younger brother Ray (Tim Musachio) arrives from California and the fraternal fun begins.

Henry was dead when Earl arrived and he is not ready to tell anyone or do anything about it, even though, as Ray says, “I think he’s starting to stink.” Henry has almost no possessions for the brothers to fight over, but they do anyway. A tool box of cheap tools. Not much in the fridge. A bottle of tequila. But there is one prize: a photo album full of memories. The brothers begin to argue immediately, about events of the past and the present.

Esteban arrives carrying hot soup for Henry. Despite Earl’s protests, Ray forces Esteban to look at Henry’s dead, not sleeping, body. Later funeral attendants come in with a body bag to take the corpse away.

Ray wants to find out more about how his father died and questions Esteban about the events of the last night, after Henry received his monthly veterans’ check. (“It was blood money from killing Japs …. I dropped bombs on total strangers….”)

Esteban remembers that a taxi driver picked up Henry and Conchalla to take them fishing. Ray gets the driver to come out from Albuquerque, thinking he will get a fare. The taxi driver (Julian Hester) is happy to partake of Henry’s bottle, but Ray is determined to learn about that evening with Henry. The driver reenacts the events and is joined in the dreamlike activity by Henry and Conchalla. The trio arrives home after fishing with one tiny dead fish. Conchalla disrobes and takes a bath, proclaiming that she will “bring the fish back to life between her thighs.” (The bath scene clearly delighted the male audience member seated next to the tub).

In act two, Earl has a hangover and Ray returns carrying bags of groceries. He’s decided he’s going to stay. They relive their childhood, including their father beating their mother. Ray hoped Earl would stand up to his father, but he just stood by.

Henry remembers: “Your mother threw me out. She locked me out of the house…. I saw the blood and thought I killed her, but it was me that I killed…. I got in the car and just drove, without a map.”

To Earl: “You were there the whole time and you could’ve stopped me.”

Earl replies, “I couldn’t. I was scared, I was just too scared.”

In the final scene, Earl is sitting next to Henry’s corpse. Ray says, quietly, “You remember me. I was never one to live in the past. That was never my deal.” Earl responds, “Yeah, yeah, right. I remember.”

Kaiser Ahmed’s direction effectively moves the story from dream to reality and back again and keeps his talented cast in rhythm with the story. Nall is excellent as the very-much-alive Henry. I remember Nall vividly for his Jeff-nominated performance as the cultured and brutal SS captain in the 1999 Famous Door Theatre production of “Ghetto”. Correa is an exciting and dynamic Conchalla and Hester is quirky and hyperkinetic as the taxi driver. Both Vogel and Musachio bring realism to the constant sibling warfare and Jalandoon’s Esteban is believable as the friendly, nervous neighbor.

The set is a nondesign design by Jacob Bray, who has created a believably grungy interior for the deceased bachelor in the desert. Thomas Dixon’s musical backgrounds and dance interludes support the story line well. Because of the lightboard problem, opening night was illuminated only by overhead lights, so Scott Pilsbury’s lighting design doesn’t get a review.

This is not Shepard’s best play, but it’s an interesting one and gets an excellent production here. But “The Late Henry Moss” deserves a caveat. It’s not for the faint of heart. There are moments when you might wish you had stayed home to read a book. But as a theatrical experience, it’s pure Chicago.