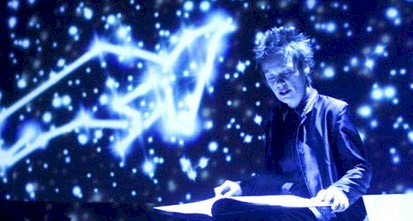 Laurie Anderson never makes it easy. Either she is a brilliant stage designer and performer, her work transcending labels and calling forth a stunning new hybrid form which includes dance, music, and spoken word, with each minute infused with a rush of the most amazing sound and visual technological advances – all that, OR she is theater&#146;s reigning emperor, goose-stepping around the stage, half-playing and half-chanting a pretentious trashing of an American literary classic, with no one willing to rise from the posh audience seats to inquire: &#147;Mommy? Isn&#146;t she still playing that same minor chord she started with an hour and a half ago?&#148;

Of course her medium is experimentation, and it is not meant to be easily categorized. There are moments in Songs and Stories From Moby Dick, particularly in the first half hour, where there are no doubts ringing in one’s head. Captain Ahab (Tom Nelis) makes a dancing entrance that is the pinnacle of the entire show, a two legged man using one leg, on crutches he maneuvers until you&#146;re sure you&#146;re seeing Ahab&#146;s famous peg. Laurie Anderson&#146;s own entrance, playing a droning minor chord on her violin in front of a video screen of a crashing ocean, as we see Melville&#146;s words flashing across the water, is also brilliant. Anderson&#146;s talking stick is impressive when you first see it – it&#146;s a kind of digiridoo-shaped synthesizer, pre-programmed so it could probably do your laundry as well as sound like thunderbolts. The opening half hour is strong because it appears to be the beginning of something innovative and involving.

But…is it? After a while the sameness of the music and the repetitiveness of the performers’ movements begin to set off that little cynical alarm clock: is she going somewhere with this? Will any of these tiny musical vignettes actually turn into songs? Will that drone ever stop? And will we ever find the great white whale?

Of course Herman Melville wrote Moby Dick in the same manner. A bit of a story, then a lot of musings about related or nonrelated subjects, then back to the narrative again. In this way Anderson has remained true to the pacing of Melville&#146;s epic novel. Whenever his words are used, their poetry and majesty ring through the concert hall.

So what&#146;s the beef? Clearly one can&#146;t approach a Laurie Anderson performance like a concert, because it isn&#146;t. The music has no more weight than the scenery or the technology or the movements of the dancers. It is for this reason that her work tends to enthuse performers and bring musicians to a rolling doze. The first half of Songs and Stories From Moby Dick is promising, but the lack of motion later on was disappointing. Laurie Anderson&#146;s white whale is theater for the head, not the feet; an intellectual exercise, not a soulful experience. She starts off like gangbusters, but whether the end justifies the means is a question even poor old Cap&#146;n Ahab had a tough time answering.