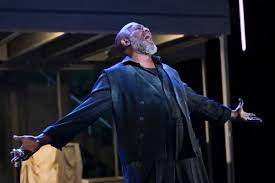 Oakland native Marcus Gardley’s remarkable modernization of Shakespeare’s tragedy, “King Lear,” shined as brightly as the two-story set of a San Francisco house under Cal Shakes’ night sky. This world premiere is a masterful, poetic production that mirrors Shakespeare’s story but reimagines it with a 21st-century modern-verse vocabulary that the audience can more readily understand.
In Gardley’s powerful version, the aging Lear (virtuoso performance by James A. Williams) is a Bay Area real estate magnate who lives in the Fillmore District in the late 1960s. It’s a difficult time there because of the City’s “redevelopment” plans that dismantle the area, not to mention the political unrest surrounding the Vietnam War and the Black Panthers. Lear, filled with hubris and vanity, divides his kingdom between his two falsely flattering, greedy daughters (well-acted by Emma Van Lare and Leontyne Mbele-Mbong). But he banishes and disinherits his favorite daughter, the faithful, loving, but truthful Cordelia (multitalented Sam Jackson).

Most of the play’s action involves the machinations of Lear’s two duplicitous daughters, Lear’s despondent disillusionment with them, and his emerging mental illness. Subplots involve the Earl of Gloucester (excellent Michael J. Asberry) and his illegitimate son, Edmund (terrifically scheming Jomar Tagatac). Unhappy with his bastard status, Edmund deviously tries to displace his older brother and the legitimate heir, Edgar (effective Dane Troy). Ultimately, there is a battle among the three daughters and their husbands for Lear’s domain, but few live to see the resolution and restoration of the kingdom.

Gardley has added new and modernizing touches to Shakespeare’s version. Shakespeare’s Fool is now the Comic. As convincingly played by Sam Jackson, the Comic does some sardonic riffs on the political scene. A new character, the Black Queen (terrific Velina Brown), arrayed in a white floor-length gown, sings soulful numbers accompanied by a small jazz band (great music by Marcus Shelby). Poor Tom (Edgar in disguise) now has the attributes of an Uncle Tom.

This production of “Lear “has a personal bittersweet aspect since it’s Eric Ting’s (Cal Shakes’ Artistic Director) final show. After seven years of inspired creativity, Ting is leaving Cal Shakes to join his family in New York. As co-director of “Lear “(with Associate Artistic Director Dawn Monique Williams), the project brought Ting a second chance to work with Gardley after the super-successful 2017 “black odyssey” written by Gardley and directed by Ting.

Much credit goes to two organizational partners of Cal Shakes’ “Lear”: Play On Shakespeare, a nonprofit organization that commissioned writers to update all of the Bard’s plays, and the Oakland Theater Project.

“Lear’s “confident direction, splendid acting, creative stage set (Tanya Orellana), and elaborate costumes (Lux Haac) complement the performance. In some ways (dare I say it!) Gardley’s “Lear “enhances the Bard’s King Lear for modern audiences. Although a tiny bit too long for me (it’s one of Shakespeare’s more lengthy plays), “Lear” is great theatre and a total pleasure.

“Lear” runs at the Bruns Amphitheater at Cal Shakes through October 2, 2022. The performance is approximately three hours, including one 15-minute intermission. Cal Shakes advises the audience to dress warmly in layers since the temperature may drop during evening performances. There is a complimentary shuttle from Orinda BART. Single tickets range from $35–$70 (subject to change). Evenings at 7:30 p.m., Sunday Matinees at 4:00 p.m.; select Saturdays at 2:00 p.m. Proof of vaccination (or a recent negative test) is required for admittance. Masking is encouraged but not required in the outdoor amphitheater. For information, extended dates, and tickets, visit http://www.calshakes.org or telephone 510-548-9666.
This article originally was published by Berkeleyside.