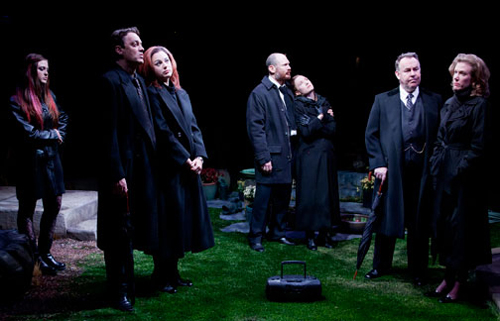 “Life of Riley” is Sir Alan Ayckbourn’s 74th play, and San Diego audiences have the privilege to see its U.S. premiere production. Sparkled with sarcastic humor only the British can master, the play takes us to the heart of a community of thespians who learn about their friend George Riley’s terminal diagnosis. Riley is the center of his own universe (and ours for the night) and in his final hour, all shall revolve around him. Cleverly, Ayckbourn didn’t bother giving Riley a voice. The elusive man resides offstage. Instead, the privy audience witnesses the commentaries and emotional reactions of the gallery of friends, which includes a doctor whose wife happens to be an old friend of Riley’s, a best-friend who struggles with extramarital activities and delights in spoiling his teenage daughter, and a soon-to-be ex-wife who has escaped to the country with a new-found love. Through them, we get to know Riley intimately, and the invisible man becomes a vivid persona.

If an acting award can be given for this production, it must go to Colin McPhillamy, who plays Riley’s doctor of the same first name, Colin. McPhillamy owns the character so completely, he must have jumped straight from Ayckbourn’s imaginiation.

That is not to say the rest of the cast doesn’t have great talent. Any actor needs to be accomplished to honor the script. Indeed, “Life of Riley” is not so much about what the characters say, but rather about what they choose to keep to themselves. Lack of assertiveness is the key dysfunction and, if done well (and it certainly is in this production), the chaos it creates is wonderful to watch. Ray Chambers, who plays Riley’s best friend, Jack, makes some great choices and conveys the human nature of the part very well. Dana Green plays his wife, Tamsin, and sparkles in that role, while Rebecca Gold is his teenage daughter, Tilly. Henny Russell is Kathryn, Colin’s not-so-innocent wife. Russell exploits skillfully the sarcastic and manipulative dialogues and situations. Nisi Sturgis plays the runaway wife of Riley, Monica; the farmer she fell in love with, Simeon, is played by David Bishins.

Award-winning director Richard Seer heads this wonderful production. The set, which consists of four backyards, is by Robert Morgan. Very efficiently, the style of the different gardens and furniture (or lack of) reflects the provenance and attitudes of the different families involved in the plot. It also offers a nice flow throughout the play in this in-the-round production. Morgan also appropriately designed the costumes. Lights are designed by Chris Rynne and Paul Peterson is the sound designer.

If you are still hesitating to buy a ticket because you think the subject at hand, learning of a dear friend’s dying prognosis, is a little too morose for an evening of fun, that’s because you’ve never known how amusing it could be to psychologically mess with your friends before you kicked the bucket… until you saw “Life of Riley.”