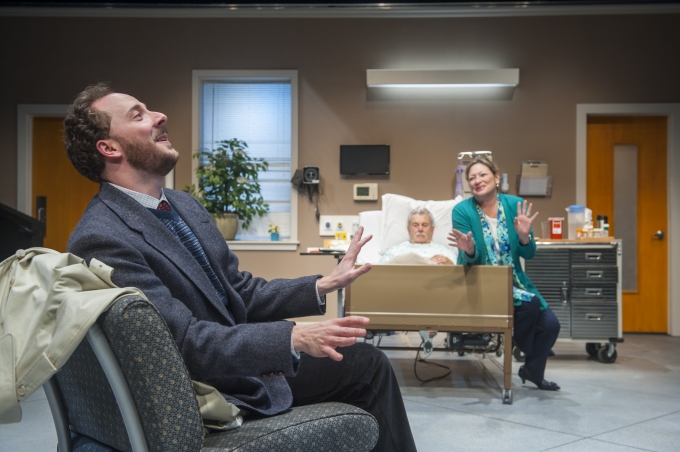 The Lyons sure can roar! At each other, at perfect strangers and, after a couple of hours of Nicky Silver’s dark comedy, newly opened at Berkeley’s Aurora Theatre, it seems at the audience as well.

The family Lyons — dying father Ben (a wonderfully dyspeptic Will Marchetti); mama Rita (Ellen Ratner), who can’t wait for her hubby’s last breath so she can redecorate the living room; alcoholic, divorced daughter Lisa, the ultimate drama queen (Jessica Bates); and Nicholas Pelczar as the spoiled son Curtis, a gay failed writer who, for lack of a love life, keeps inventing one — define dysfunctional. Their interactions are focused on themselves rather than the person they connect (or appear to connect) with, in a sort of narcissistic orgy run amok. And, believe it or not, this is all very funny. At least in the first act.

After intermission things turn more serious. Ben has passed on to a place where he no longer can hear Rita’s nagging. Lisa has jumped back into a bottle (or two) of Jack Daniels, and Curtis, as a result of trying to live out one of his fantasies, now occupies the stage-center hospital bed. As for Mom, she still has a surprise or two up her sleeve.

And there lies the rub in Silver’s play, which was a huge hit on Broadway with Linda Lavin in the role of Mommy Dearest. There is so much going on with these people, none of them particularly likable and none of it remotely pleasant, that, in spite of Silver’s obvious knack for dialogue, the viewer is somewhat emotionally confused. Is this a comedy or the saddest family tragedy since “King Lear”? Is it OK to laugh at Rita’s ramblings, hilarious as they are, when she is such an obvious bitch (her husband’s words, not mine)? What about Lisa, hopeless drunk, mother of two small sons and still hung up on the ex-husband who used to beat the daylights out of her? And the hapless Curtis? Don’t even ask.

Two more characters round out this excellent cast, deftly directed by the esteemed Barbara Damashek (“Quilters”). They are Edris Cooper-Anifowoshe, as a smart-mouthed, somewhat stereotypical African-American nurse, and Joe Estlack as a real-estate agent with a violent streak who shows up in the second act to sell Curtis an apartment and gets more than the down payment.

Eric Sinkkonen designed the hospital room set with attention to detail. Even the stagehands are dressed in the scrubs worn by orderlies as they move props around during intermission. Callie Floor’s costumes are perfection, from Rita’s expensive matronly suits to Lisa’s profusion of scarves and the aforementioned hospital gear (one small change: Ben’s and Curtis’s hospital gowns are sewn up in the back so they can take their bows in all modesty).

And the bows are well-deserved all around. It’s the play I’m not so sure about.