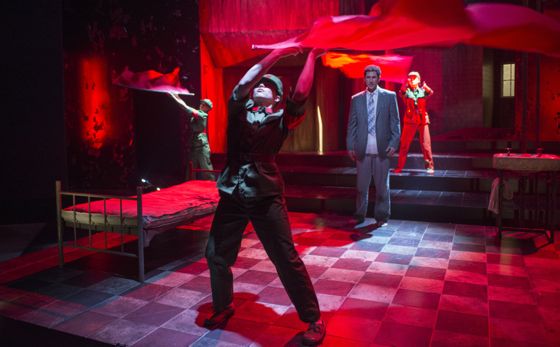 Court Theatre is staging its new production of David Henry Hwang‘s 1988 hit play, M. Butterfly, in Hyde Park. The powerful and tragic story is always fascinating but Court’s production on opening night did not flow as smoothly as most shows by artistic director Charles Newell. Everything about this play should work to seduce, mislead, confuse and surprise us. Perhaps it’s because we now know the story so well, but the Court production doesn’t quite hit the mark.

Sean Fortunato, one of Chicago’s talented actors, plays a wrenchingly sad and tortured Rene Gallimard, the mid-level French foreign service officer posted to Beijing with his European wife Helga (very well played by Karen Woditsch). The play opens in 1980, as he is imprisoned for treason for passing diplomatic secrets to his Chinese inamorata, the butterfly of the title. Rene tells us his story is based on Puccini’s Madame Butterfly, with himself as Pinkerton and his lover as Cio-Cio-San, the Chinese feminine ideal in the opera. The play proceeds in flashbacks to the early 1960s, and in dreams, sometimes back to his childhood and teenaged years.

The story is based on actual events. A career French foreign service officer named Bernard Boursicot was found guilty of treason in 1986 for passing official secrets to his lover, a male Peking opera star. Boursicot believed his lover to be a woman; they had carried on a long affair in Beijing and later in Paris. The story is told in a book titled Liaison: The True Story of the M. Butterfly Affair by Joyce Wadler and in a 1993 film directed by David Cronenberg, as well as in the stage version.

The news of the affair and his sentence make Gallimard a celebrity. His naïveté is discussed at Parisian parties. “You see? They toast me. I’ve become the patron saint of the socially inept,” Rene says in his prison cell.

In the Court production, Nathaniel Braga plays Song Liling, the opera star with whom Gallimard falls in love after seeing Song’s performance in the Puccini opera. When they meet, Song tells him, “If you want to see real theater, come to the Peking Opera.” And he does, for 15 straight weeks, apparently not aware that male performers traditionally play all the parts.

The relationship between Rene and Song quickly develops into an obsession for the diplomat, who is enchanted with Chinese women. (“The sad truth is that all men want a beautiful woman, and the uglier the man, the greater the want.”) His relationship with his wife deteriorates and he has a half-hearted fling with a European woman he meets at a party (Laura Coover), who is more interested in sexual activities than Rene is. Song even convinces Rene that she is pregnant and procures an infant from a rural family. Rene believes the child is his and provides financial support, later moving the boy to Paris.

Act two is set in 1980 in Paris, and moves between Rene’s prison cell and the courtroom. Rene and Song (now dressed in an Armani suit) are both on trial. Rene insists in his testimony that he did not know Song was a man. He continues to deny this, until Song disrobes to prove his sex.

Rene still denies reality. “I’m a man who loved a woman created by a man. Everything else simply falls short.” Later he says, “Today I finally learned to tell fantasy from reality. And, knowing the difference, I choose fantasy.”

Fortunato as Rene is onstage for much of the 2.5 hour play. His performance seems to me to be too one-noted; more energy and passion could have given the play the power it lacks. Braga almost looks like a woman, costumed in kimono or operatic costume, but he is not totally convincing. His performance seems overly mannered and his gestures are not always natural.

The female cast members excel. In addition to Woditsch and Coover, Emjoy Gavino is excellent as the committed Communist, Comrade Chin. The Kurogo dancers — Aurora Adachi-Winter, Erin Clyne and Sarah Lo — are also fine. Mark L. Montgomery as Rene’s old friend and consul Sharpless and Terry Hamilton as a diplomat and judge round out the cast.

Playwright Hwang layers many nuanced themes in this classic and beautifully written play: sexual identity and male-female relationships, Western misreading of Asian cultures, French and US foreign policy during the Vietnam era, the puritanism of China’s Cultural Revolution, the themes, characters and practices of China’s traditional Peking Opera — and the music and story of Puccini’s opera. The play highlights Westerners’ cultural tone-deafness. That was in the 1960s. Here’s a question for your post-play discussion: Has that tone-deafness changed? Have we become more knowledgeable and sensitive?

M. Butterfly is a complex play with characters who are not what they seem and who may not act as they should. It’s a tragedy with some occasionally witty dialogue. But apparently the audience at Court Theatre’s opening night thought it was a comedy with a bit of slapstick and broad humor. The audience hoots and guffaws were disconcerting as this tragic story progressed.

This review was previously posted on gapersblock.com/ac/
related posts